Dividend investors look for different things from the stocks they choose, with some looking for high yields while others want solid dividend growth. Kimberly-Clark (NYSE:KMB) is a rare example of a stock that has something for everyone, with a yield that's well above average combined with a long track record of raising its dividend payouts annually. With 41 straight years of dividend increases, Kimberly-Clark qualifies for membership in the elite ranks of the Dividend Aristocrats, joining just a few dozen stocks that have put together 25-year track records of annual raises in their payouts.

Kimberly-Clark is the company behind the Kleenex brand name, with a wide array of personal- and health-care products as well as tissues and sanitizers. Households throughout the U.S. and around the world regularly rely on Kimberly-Clark's products, helping the company maintain consistent financial performance even in challenging markets. Let's take a closer look at Kimberly-Clark to see whether it's likely to be able to sustain or even improve on its dividend growth.

Can Kimberly-Clark give investors everything they want?

On top of a strong yield and consistent dividend growth, Kimberly-Clark has seen its shares rise dramatically over the past several years, hitting all-time record highs during the spring of 2013. Share-price gains of almost 20% over the past year have built on a longtime track record of success, with total returns of about 11% annually since 1993.

Kimberly-Clark's relatively modest size doesn't keep it from being competitive even in a crowded industry worldwide. Procter & Gamble (NYSE:PG) and Unilever (NYSE:UL) (OTC:UN) are global giants with much larger market capitalizations and revenue figures, yet Kimberly-Clark has defied their potential dominance and managed to rank No. 1 or No. 2 in market share for its top brands in 80 different countries across the globe.

Still, more recently, investors seem to have gotten more sensitive to Kimberly-Clark's share-price valuation. With the stock fetching a trailing earnings multiple above 20, Kimberly-Clark is fairly pricey for a stock with modest growth prospects. Moreover, rising costs have pressured margins throughout the industry, putting a lid on potential earnings increases and thereby making it even harder for the company to justify a rich multiple despite its healthy dividend yield.

We've also seen rising interest rates in the bond market put pressure on dividend stocks more generally. As bond yields rise, dividend yields have to rise in tandem in order to maintain their relative attractiveness. That in turn tends to push share prices down. Combined with valuation concerns, the impact on Kimberly-Clark has been to knock about 10% off its shares in recent months. 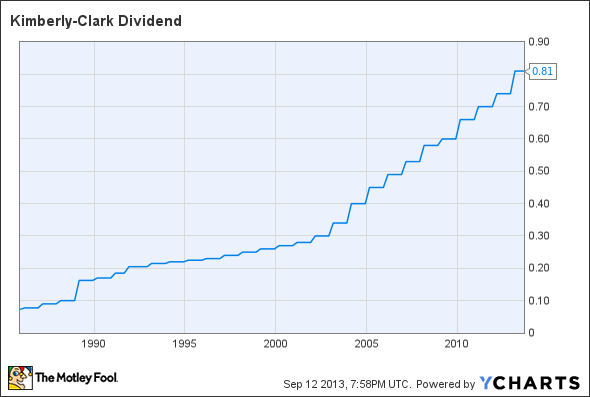 The good news for dividend investors is that after long periods of slow growth, Kimberly-Clark has really accelerated its dividend increases over the past decade. Earlier this year, the company's annual boost amounted to almost 10%, which was an improvement over the roughly 6% increases it made in early 2011 and 2012.

When will Kimberly-Clark boost its payout?
One thing investors should keep an eye on over the long run is Kimberly-Clark's payout ratio, which is relatively high compared to some of its Dividend Aristocrat peers. Its willingness to be generous with its dividends is a key reason its yield is so high, but investors will need to see earnings growth keep up with rising dividend payouts in order to keep sizable future increases coming. Kimberly-Clark's near-term success should play a big role in whether it's able to make another 10% dividend increase early in 2014 or whether it returns to more modest raises.

With a solid stable of popular brands, though, Kimberly-Clark has the parts in place to stay in the good graces of income-hungry dividend investors. With continued efforts, Kimberly-Clark should be able to sustain its impressive dividend track record well into the future.

Click here to add Kimberly-Clark to My Watchlist, which can find all of our Foolish analysis on it and all your other stocks.