The Dow Jones Industrials (DJINDICES:^DJI) stayed relatively calm through early afternoon, falling 24 points as of 12:30 p.m. EDT as the onslaught of earnings news and some troubling data from the housing market left investors uncertain about the short-term direction of the economy and the stock market. But looking beyond today's trading, one of the most surprising things about the Dow's recovery from its January pullback is that bond yields haven't skyrocketed in response. In fact, in many ways, it's apparent that the Dow could actually be benefiting from the strength in the bond market that has helped keep yields down. 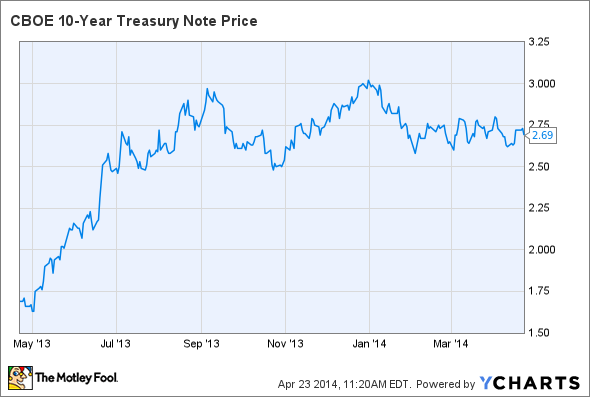 As you can see, the 10-year Treasury yield (TREASURY: TC10Y) has moved gently upward and downward lately, in stark contrast to its behavior last year. In mid-2013, 10-year yields climbed from below 1.75% to 3% in just a few months, creating major losses for bond investors and raising considerable concern about the eventual impact that the Federal Reserve's tapering of quantitative easing would bring. At the same time, stocks rallied sharply last year on signs of economic strength, giving investors another example of the usual inverse relationship between the stock market and bond prices.

Yet by focusing on the most recent few months, you can see that the usual relationship appears to have broken down somewhat. In fact, bond-market stability looks like it has actually supported the stock market. 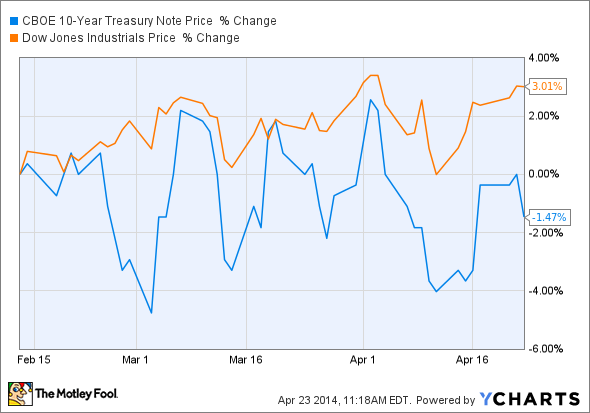 One key reason behind this changing relationship between stocks and bonds is that many U.S. companies have taken full advantage of the low interest rate environment of the past several years to lever their balance sheets by taking on more debt. Dow Jones Industrials component Verizon (NYSE:VZ) is perhaps the most obvious example, as it took on tens of billions of dollars in debt to completely take over its Verizon Wireless unit from Vodafone (NASDAQ:VOD). The rise in balance-sheet leverage has in turn has made corporate profits more dependent on the ability to refinance debt at favorable rates. The longer those rates stay low, the easier it will be for companies such as Verizon to preserve their newly expanded profit margins and keep delivering bottom-line growth to shareholders.

At the same time, Fed intervention has made bond-market investing a lot different than it was historically. Many players in the bond market assume that the Federal Reserve won't hesitate if necessary to step back in and make further adjustments to its bond-buying practices in order to bolster the overall economy. Without that crutch, some investors believe that bond prices would have fallen much more substantially than they have.

As nice as it is to have rules of thumb to guide your investing, you can't take for granted that the relationship between stock and bond prices will remain constant over time. Only by watching changing trends can you identify shifts in thinking and adjust your investment strategy accordingly.