As the Dow Jones Industrial Average (DJINDICES:^DJI) approaches the halfway point of the year, investors have had to content themselves with relatively modest gains. So far in 2014, the Dow is up less than 2%, despite having set nearly a dozen new all-time record highs along the way. But one simple dividend strategy known as the Dogs of the Dow has more than tripled that return, with prices of the strategy's stock picks rising almost 6% even before including the impact of dividends on total return. Let's take a look to see why the Dogs of the Dow have performed so well and why Intel (NASDAQ:INTC) and Merck (NYSE:MRK) have played such a vital role in the strategy's success so far this year. 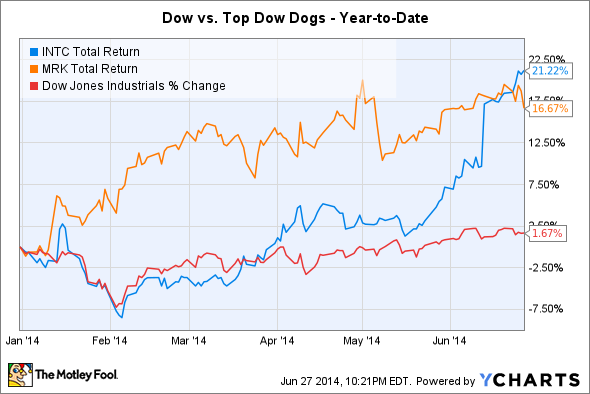 The Dogs of the Dow strategy is simple: at the beginning of the year, you pick the 10 top-yielding stocks in the Dow, buy them, and hold them throughout the year. At the end of 2014, you'll reorder the stocks by dividend yield again, selling any that don't make the new cut and replacing them with the stocks that weren't on 2014's Dogs list.

The virtue of the Dogs of the Dow is that it tends to reward dividend investing with a value-investing bent. Specifically, dividend stocks whose share prices underperform the Dow tend to see their relative yields rise compared to other Dow components, making them more likely to be Dogs. That trend wasn't as obvious this year, but only because the Dow soared in 2013. As a result, both of this year's best Dow Dogs performers, Intel and Merck, were actually slightly undervalued coming into the year, at least in the sense that their shares rose by slightly less than the 26.5% returns that the Dow Jones Industrials gave investors in 2013.

Intel's huge gains of more than 20% so far in 2014 come largely from the fact that investors have had new hope that the chip giant will finally make some long-awaited headway in the mobile-device space, where it has until now been a dreadful laggard. With efforts to release chips for the higher end of the market as well as targeting emerging-market buyers for more affordable low-end chip offerings, Intel is looking to become a bigger player in mobile devices worldwide. At the same time, Intel has also benefited from a revival in PC demand, with many users choosing to upgrade their computers in the light of a popular version of the Windows operating system no longer receiving support. After years of sluggish performance, Intel looks like it's finally breaking out of its funk.

Merck, meanwhile, is up almost 17% as the entire pharmaceutical sector has performed strongly. Merger and acquisition activity has picked up dramatically in the space, with Merck targeting Idenix Pharmaceuticals while some of Merck's peers look for even bigger acquisition targets -- with varying degrees of success. Pharma companies need pipeline growth, and currently, it's easier to pay up to buy other companies' pipelines than to develop drugs on your own. Buyouts are no guarantee of future success, but right now, dividend investors are optimistic about Merck's growth prospects as well as the sustainability of its quarterly payout.

The Dogs of the Dow don't always outperform the Dow Jones Industrials. But dividend investors enjoy the higher yields and often greater stability that come from dividend stocks, and this year at least, that strategy is paying off well for those who follow it.