However, unlike U.S. Treasury bonds, where investors know exactly how much they'll earn, the yield on mortgage-backed securities, or MBSes, isn't certain. This is largely due to prepayment risk, which is one of the most important risks mREITs must manage. Prepayments affect both mREITs' earnings and their ability to borrow.

I believe Two Harbors' ability to better manage this risk is one reason to favor it over Annaly.

As the name implies, prepayments are early payments by the borrower on a mortgage. Listed below are a few reasons a borrower might prepay:

By paying a little extra each month (general prepayments) or making a large lump sum payment -- most likely due to a home sale -- borrowers can reduce the duration of their mortgage and the amount of interest they'll pay on their loan.

Refinancing works a little differently, but ends with the same result. If prevailing interest rates fall, borrowers can renegotiate for a lower interest rate on their mortgage. This can both reduce the mortgage's lifespan and the amount of interest the borrower will pay.

Ultimately, all three cases work out well for the borrower, but are less than ideal for Annaly and Two Harbors.

How this affects mREITs
If the rate of prepayments increases -- shortening the life of securities -- Annaly's and Two Harbors' MBSes will yield less. This has a number of wide-reaching consequences.

On the earning side, lower yields mean less income to distribute to shareholders. Also, since borrowers are more likely to refinance when interest rates are falling, it creates reinvestment risk: When Annaly or Two Harbors buy new securities they will have a lower starting yield.

Prepayments also have an impact on the borrowing side. Since both companies use their MBSes as collateral for borrowing, if the value of those bonds decreases due to increases in prepayments, they may be forced to pay back their loans early, or use additional collateral. This limits the amount of borrowing they can do.

Two Harbors' advantage
Constant prepayment rate, or CPR, is the amount of outstanding loan balance, on all securities, expected to be prepaid within the next year. Since 2010, Two Harbors has consistently had a lower CPR than Annaly. 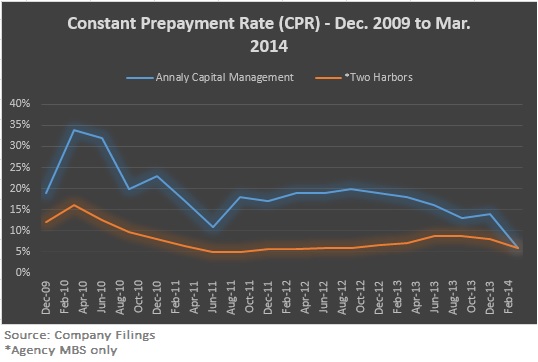 A mixture of rising interest rates in 2013, the potential for rising rates in late 2014, and some extreme winter weather helped create the perfect environment to grind prepayments to a near halt this year. However, over the last five years Two Harbors has consistently seen lower prepayment rates than Annaly.

How?
While prepayments aren't exactly predictable, some scenarios make them less likely. For instance, since borrowers have to pay a fee to refinance their mortgage, it only makes sense to refinance if the borrower will save money in the long run.

This is why Two Harbors targets low-loan balance and seasoned securities, both of which create scenarios in which it isn't in the borrowers' financial best interest to refinance. The company also invests in high loan-to-value mortgages -- which, due to the lack of equity, borrowers can't refinance -- and securities that either don't allow, or charge a high penalty for, refinancing.

Put this all together and you have a perfect storm that keeps prepayments low and Two Harbors' cash flows consistent.

So if this strategy works so well for Two Harbors, why doesn't Annaly do it? Well, these types of assets are very unique, and being unique means there aren't many to be had. Considering that Annaly's agency MBS portfolio is more than seven times the size of Two Harbors', it can't move the needle investing in smaller pools of odd assets.

Looking forward
Over the past seven months prepayments have been incredibly low, which has helped fuel mREIT returns. With the likelihood of rising interest rates over the next few years creating a disincentive for refinancing, we could see prepayments stay fairly low.

With that said, this environment won't last forever, and I believe Two Harbors' ability to better manage prepayments will create more consistent cash flows over the long term. This is one great reason to buy and favor Two Harbors over Annaly.