Over the last eight years Seadrill (NYSE:SDRL) has been a dream stock for both income and growth investors. Since 2008 it has grown its dividend by 22.22% annually, which has resulted in Seadrill becoming one of the best performing stocks of the last several years. 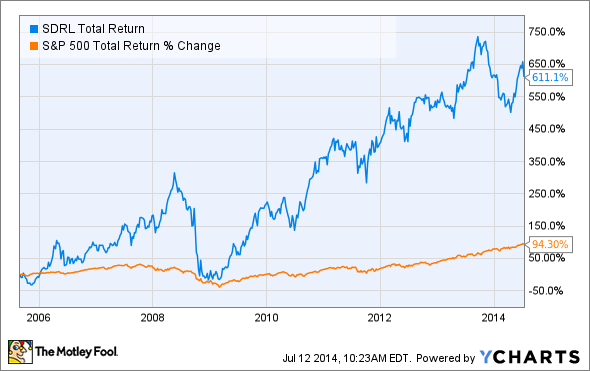 The cause of Seadrill's hyper growth? A boom in offshore oil drilling that saw day rates for state-of-the-art drill ships climb as high as $653,000.

However, like every sector tied to the energy industry, prices are cyclical. Recently analysts have stated growing concerns about the industry's short-term pricing power, Seadrill's $14 billion debt load, and the sustainability of its dividend. Fool contributor Jason Hall has gone so far as to suggest it might be time to sell Seadrill, arguing that the combination of a 33% growth in the global drill ship fleet through 2015 (during market weakness) and its recent erratic debt offering threatens both Seadrill's balance sheet and dividend.

Mr. Hall makes some very good arguments in his article, which I advise readers to consider. However, I must respectfully disagree with his overall conclusion by offering counterpoints to two of his main arguments.

Thus far Seadrill has proven itself adept at obtaining continued high day rates despite market weakness. For example, in the second quarter Seadrill obtained four new contracts and one extension for five of its jackup drills worth $433 million. Two of those rigs, the West Ariel and West Mischief, saw day rate increases of 29% and 11% respectively.

Also two of its drill ship newbuilds, the West Mira and West Neptune, recently secured new contracts with day rates of $590,000 and $570,000 respectively. This is far above the $450,000 level some analysts are worried is coming.

Seadrill's debt: does it threaten the dividend?
Mr. Hall correctly pointed out that Seadrill's recent convertible debt offering would have been against shareholder's best interests. It would have resulted in a net increase in interest of $3 million annually, while resulting in 5% shareholder dilution and an extra $100 million/year in dividend expenses.

However, as another Fool contributor, Faisal Humayun pointed out, Seadrill's cash flows are more than sufficient to service its debts and pay its dividend.

Specifically, Humayun points out that Seadrill's last quarter saw adjusted EBITDA of $788 million and operating cash flows of $656 million. Its debt interest was $122 million, giving it an interest coverage ratio of 6.5.

Even assuming Seadrill had gone through with its shareholder-unfriendly debt offering, this would have resulted in a combined quarterly dividend/interest expense of just $617 million, well covered by its operating cash flows.

The fact that Seadrill cancelled its debt offering is also a good sign. Yes, it should never have offered such a bad deal, but it deserves credit for recognizing its mistake and not harming shareholders. But what about Seadrill's cash needs? Surely it needs that cash, or why make the offering? Well, Seadrill has three other sources of cash that can easily replace the aborted debt offering.

Seadrill also owns 50% of Sevan Drilling and 40% of global oil services firm Archer; together these stakes are worth $260 million.

Seadrill has 34 total ultra-deepwater rigs to potentially drop down to both North Atlantic Drilling and Seadrill Partners. With EBITDA expected to grow 20% annually through 2016, Seadrill's dividend is secure and likely to continue growing.

Foolish takeaway
Seadrill and its 10.6% yield are safe and analysts are expecting Seadrill's dividend to grow by 6.7% annually over the next decade fueled by the offshore drilling megatrend (19% annual growth through 2035). Income investors hoping for high yield but faster dividend growth might want to consider North Atlantic Drilling, whose 9.2% yield and 7% expected dividend growth rate (likely higher due to the Rosneft deal) means it's likely to be a fantastic market outperformer over the long run.