With another billion-dollar deal under its belt, Frontier Communications looks both juicy and risky. Should you pull the trigger on Frontier today, or wait another week?

Rural telecom Frontier Communications (FTR) is gearing up for a third-quarter report after the closing bell on Nov. 3. Frontier shares have gained an impressive 34% year to date, but are also trading 14% below 52-week highs, which were set three months ago.

Would this be a good time to pick up a few Frontier shares, or should you wait for fresh results before taking any action on this stock? Let's find out.

The good
First, Frontier just finalized  another large acquisition, and that's a good thing. Following the $8.6 billion pickup in 2011 of Verizon Communications' (VZ 1.02%) landline and FiOS Internet/TV services in 14 states, Frontier closed a $2 buyout of AT&T's (T 1.18%) hard-wired operations in Connecticut. The ink is still wet on the final agreement, which was signed Friday morning.

This deal adds 900,000 voice lines, 415,000 broadband Internet customers, and 180,000 video subscribers to Frontier's customer Rolodex. These are very large figures for a company that previously sported about 3 million total subscribers, including 1.9 million broadband lines and less than 400,000 video customers.

The deal has fought its way through regulatory red tape since last December, and occasionally looked unlikely to close at all. But the final signature eventually arrived two months ahead of the originally planned schedule.

Big acquisitions can be a gamble, but Frontier has a history of making them work. The Verizon landline takeover provided an instant adrenaline shot to Frontier's sales, followed by rising cash flows less than two years later. 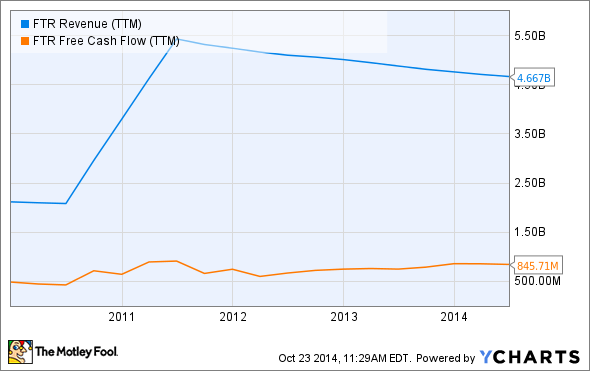 The bad
The AT&T transaction isn't an immediate catalyst for Frontier's stock, but a strong move for the long-term future of the company. Frontier has a few problems to deal with in the meantime.

For one, the company raised $1.55 billion of fresh debt to finance the all-cash Connecticut buyout. This loan sits atop $7.9 billion of existing long-term debt, balanced against just $800 million in cash equivalents. This is a heavy balance sheet, even by the standards of the asset-and-debt laden telecom industry.

So the game-changing asset acquisition comes with a large dose of financial risk. I would love to see Frontier addressing the debt load, repayment schedule, and impact on future dividend policies before taking any action on this stock.

The final approval of the buyout came with a handful of conditions, after all. Among other concessions, Frontier can't raise phone and broadband prices in Connecticut for the next three years, and must invest $63 million into improving broadband services in Connecticut over the next three years. These items have yet to be discussed in an earnings report or analyst call.

These details may prove crucial to Frontier's dividend support over the next several years. The company reduced its dividend payouts per share (but increased the total dividend budget, thanks to a much larger share count) when the Verizon deal closed, and hasn't increased the quarterly checks since then. The generous 6.4% dividend yield is a crucial reason to invest in Frontier, but growing payouts are even more powerful than large ones stuck in a single gear.

That's enough reason for me to sit on my hands until Frontier's management gets around to discussing their Connecticut-steeped dividend plans. The earnings report is a week away, and perhaps we will have more details at that point.