Personal care giant Kimberly-Clark (NYSE:KMB) is best-known for three things: its Kleenex tissues, Huggies diapers, and (among investors) stable dividends. This Dividend Aristocrat has raised its payout for an astonishing 42 consecutive years. That level of consistency might lead one to think the business is complacent, but that is not true. The company is controlling costs and getting rid of some businesses in an effort to focus, and these moves look likely to help the business and thus could impact dividend investors positively.

Let's take a look at some things Kimberly-Clark dividend investors should know.

Fiscal discipline
Kimberly-Clark currently pays a robust $3.36-per-share annual dividend that yields 3% at current stock prices. That's outstanding, and there are good reasons to believe that its dividend increases will continue. Ultimately, dividends come from cash flow, which is boosted by both the sale of goods and reduced expenses. On the latter point, Kimberly-Clark excels. The company is delivering on a multiyear effort to control costs and to improve working capital that should continue driving dividend growth.

And there's reason to believe that these cost-cutting efforts could get another boost. Lower oil prices may benefit Kimberly-Clark in both the manufacture and transportation of its products. At the very least, the stable rate of inflation (below), should keep production costs reasonable to help KMB's cash flows (and dividend) grow. 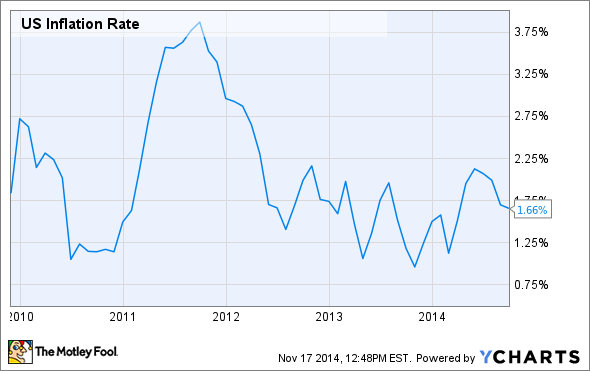 Improved focus may boost revenues
Now to the second way a company can boost cash flows, and thus its dividend -- higher revenue. While Kimberly-Clark has excelled at managing its finances, revenue growth has lagged, but there's reason to believe this may improve.

Large companies, like Kimberly-Clark, often have stagnant growth. A primary reason is that it's difficult to allocate enough resources to all of its mature business lines. That's why Kimberly-Clark's recent move to become more focused excites me. Last year the company exited much of its unprofitable European diaper business, and this year Kimberly-Clark successfully exited its health care business, by spinning it off and bringing it public in the form of Halyard Health.

These actions benefit shareholders for a couple of reasons. First, the health care segment does not fit Kimberly-Clark's core business of home care products. Separating the businesses will allow KMB to focus on a leaner core brand identity, and it makes Halyard's management team accountable to its own group of shareholders. Economic data suggest that spinoffs and their parent companies typically outperform the S&P 500. Kimberly-Clark shareholders each received stock in Halyard Health (1 share for every 8 KMB) and stand to benefit.

Second, the European diaper business was struggling. Management wants to focus its attention on profitable businesses that have pricing power and fit its core brand identity. This is a far better growth plan than simply throwing resources at every segment (and hoping for the best).

By exiting parts of its European business and spinning off the health care group, Kimberly-Clark should be able to devote more resources to its most profitable businesses. If this slimmed down, more focused, version of Kimberly-Clark can deliver higher revenues, the dividend should get a boost as well.

Buybacks and dividends
Last week Kimberly-Clark's board of directors authorized a new share repurchase of $5 billion,  for up to 40 million shares, which follows its multi-year $5 billion buyback that was launched in January 2011 and is expected to be completed in Q1 of 2015. As fellow Fool Bob Ciura recently pointed out, Kimberly-Clark's free cash flow rose 22% in the first half of this year. It has enough cash flow to raise its dividend and buy back shares, but should it?

One concern is valuation. The stock trades at a much higher price, and a higher price-to-earnings multiple than it did in 2011. 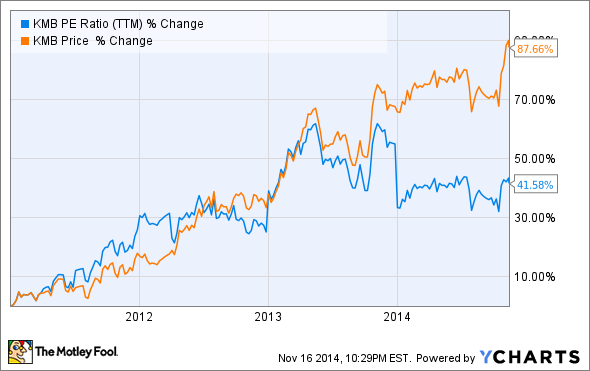 While Kimberly-Clark is buying at a higher valuation, I still think this move could benefit shareholders. It is retiring shares, which means it has less shareholders to pay dividends to. By retiring shares, earnings per share will rise as well, which will push its payout ratio (now 58%) lower, which could bolster the case for a higher dividend. Ultimately, if Kimberly-Clark's plans to reduce costs, boost profits, and retire shares pan out as planned, the dividend could be even higher next year.