The year so far has been marked by generalized weakness in the U.S. dollar, and the PowerShares DB US Dollar Index Bullish ETF ( UUP -0.47% ) is now approaching its 52-week low of $21.32. But whether or not these trends actually match the underlying fundamentals is another story, and given the magnitude of the current moves, it makes sense to start to position for broad reversals in currency markets. European banks have not been able to buy dollars this cheap since the beginning of the global financial crisis, and the better costs for euro swaps could easily prove to be a catalyst for a budding downtrend in the shared currency.

This means that those holding long positions in the CurrencyShares Euro Trust ETF ( FXE 0.72% ) should consider taking gains, given the current elevated levels. 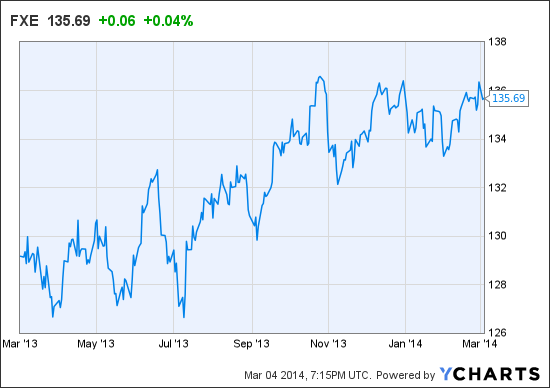 The euro itself rose by 4.2% against the dollar last year, even though the European Central Bank cut interest rates on two separate occasions. Lower interest rates are generally bearish for a currency, given that there's less incentive to hold on to that currency for extended periods of time. But currency basis swaps have normalized, and this shows that deleveraging has perhaps played too great a role in last year's euro strength. Currency investors will need to start paying more attention to divergences in central bank policy and the underlying growth rates that characterize each region.

Comparative growth rates
When trying to determine where relative currency values are headed next, start by considering the relative growth rates in each country. This is the best indication of whether or not there will be major changes in monetary policy. The U.S. dollar has lost even more ground against the British pound -- and the CurrencyShares British Pound Sterling Trust ( FXB -0.10% ) is now trading at a three-year high. So the argument can be made that it is even more important to monitor growth rate progress in the U.K. But those focusing on the euro should remember that consensus estimates for 2014 growth in the eurozone show expectations near the 1% mark -- well below the 2.9% rate of growth that is projected for the U.S. economy.

In addition to this, we have already seen comments from ECB president Mario Draghi suggesting that the central bank could actually add monetary stimulus to the economy if consumer inflation levels show weakness. This comes at a time when the U.S. Federal Reserve has already cut monthly asset purchases on two separate occasions, and newly appointed Chairwoman Janet Yellen has made public comments suggesting that the pace of tapering is unlikely to slow. The diverging trajectory here is clear, and market valuations simply do not reflect these differences.

Is the European debt crisis really over?
Once markets start to focus on economic data rather than sentiment, investors will start to question whether or not the European debt crisis actually reached an acceptable conclusion. On a comparative basis, growth projections in the U.K. and the eurozone trail what is expected for the U.S. -- and the Federal Reserve is the only developed-market central bank that has actually committed to an exit strategy. There is little to support arguments for ETFs that are tied to the values of the euro or the British Pound. When we look at the combination of likely policy implementations and broader growth rates, the clear winner is the U.S. dollar and correlated assets like the PowerShares DB US Dollar Index Bullish ETF.