Why the only true answer for investing is to "get educated."

"Make money when the market is dropping or not moving at all."

It's an appealing pitch -- particularly when it was made on the heels of a massive recession and a plunge of more than 50% in the value of the S&P 500 -- the promise to learn how to prosper during unpredictable times.

We weren't the only ones eager for guidance. The invitation to the "Rich Dad Stock Success" workshop drew more than 100 eager people to a conference room at the Hilton hotel less than four miles from The Motley Fool offices. It was a cold, damp night in January 2010. It was the second workshop held that day.

For 90 minutes, attendees (including myself and my colleague Dayana Yochim) sat in rapt attention. We scribbled madly in our notebooks, taking in every detail of what we were being told. I took seven pages of notes -- filled with investing advice that every investor needs to hear. 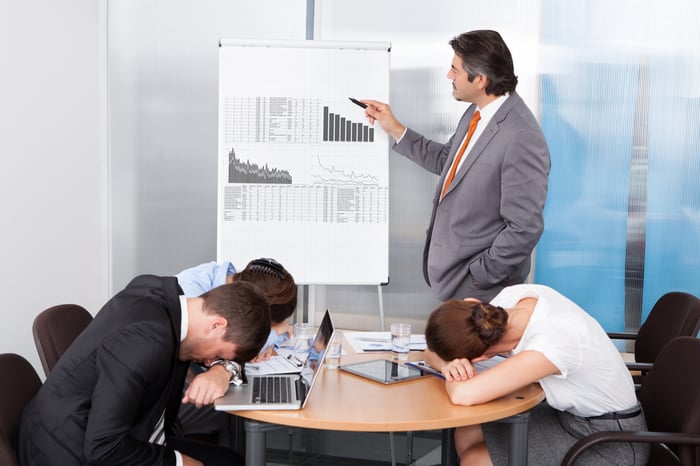 The path to financial freedom is here -- we agree
The man running the seminar had the charisma and command of an evangelical preacher. He started by polling the audience about our investing experience. Hands went up: It was split 50/50 between investors and non-investors.

Then he began with some refreshingly prudent advice. The audience was told, rightly so, that:

This message of knowledge-as-empowerment had us enthusiastically, if not physically, nodding our heads. Education, information, compounding, thinking in terms of assets and liabilities -- these were all basic beliefs upon which The Motley Fool was founded.

He had us at "get educated." Then he lost us with every subsequent click of the PowerPoint slideshow.

The man behind the curtain
You could feel the tectonic shift after about 15 minutes. It was a steep descent as our emcee betrayed his early message of education and launched into the crux of the workshop's advice. Here's a paraphrased sampling:

On managing a 401(k): You should manage it based on what's going up or down. If six funds in your 401(k) are going up and four are going down, you should own the six going up.

On how to identify a good stock, part 1: Don't even worry about it. There's a shortcut answer to the "Is this a good stock?" question -- doesn't take longer than three seconds. See part 2.

On how to identify a good stock, part 2: Buy a software package called EduTrader. Type in a ticker symbol. A green (good), yellow (neutral), or red (bad) thumb will appear next to the ticker. The thumb tells you whether a company is good, neutral, or bad from a fundamentals perspective.

On when to buy: This, too, is simple. You want a stock "going in the right direction," which means you'll need the moving average convergence divergence test, also known as the MACD.

Just to be clear, the cringe-worthy element of this experience was not being up-sold to a product or service. We do not begrudge anyone for charging for their research, teachings, or education. (The Motley Fool charges for its suite of premium services, after all.) This was a free seminar, and I knew going in there'd be an offer to purchase other things -- not unlike how the Fool offers 30-day free trials to our subscription products.

What was appalling was how actions and words so massively diverged. The earlier evangelizing about education was twisted into an unrecognizable form. This wasn't about education -- unless you count "learning how to read a green arrow and a line crossing another line on a chart" for knowing when to buy a stock.

The truth in the fine print
I haven't read a Rich Dad, Poor Dad book, either, so I can't speak to whether this was a fair representation of Robert Kiyosaki's body of work. His books are popular, so presumably they offer advice of value. The seminar was offered by Rich Dad Education, a joint venture of Kiyosaki's Rich Global and a tiny Florida company called Tigrent.

Still, I know a disaster when I see one. If you know someone considering one of these workshops, warn them that they won't learn much. Here's a direct quote I scribbled down: "I couldn't care less about why a stock goes up -- as long as it is." So much for education.

It wasn't just education that was glossed over. To give us an example of how this "make money no matter which way the market is going" strategy works, our emcee showed us the MACD strategy for DuPont in 2009. Over the course of a few months, the software would have generated buys or sells on DuPont -- cue Ed Rooney's voice here -- nine times. According to our emcee, DuPont lost 5% during the time frame used in our example, yet this MACD-fueled strategy would have returned 16%. But with one caveat: In order to use the software correctly, you need to be looking at it daily.

Oh, and another catch: That 16% doesn't include taxes or trading costs. In fact, not once did I hear trading costs, taxes, or any other frictional costs mentioned during the 90 minute presentation. By my own envelope estimates, to make nine DuPont trades in the span of six months, you'd have to pay roughly $10 per trade on nine occasions, plus $39.95 for the monthly software, plus short-term capital gains taxes -- all for a single stock in your portfolio. Also, in order to fully comprehend the software and strategy, we were told we'd need to attend a three-day seminar in the following weeks. Total tab for that: $495.

Roughly a dozen people signed up on the spot.

Investing: a battle between simplicity and complexity
One of the toughest things in investing is knowing when to keep things simple and when to dig deeper. (On the whole, I favor simplicity -- no surprise to anyone who's read past columns.)

In the end, the most discouraging part of the seminar wasn't what was said or what went unsaid: It was the captive audience hungry for education. Some uniformed military who'd just gotten off work, some parents with their young kids -- they all wanted to learn about investing, but didn't. Those seeking true investing education at the Rich Dad Stock Success seminar instead got the quick-start rundown of how to use a software system.

Where you come in
Here's where I need your help. Below I've compiled what I consider my 11 must-do's for anyone wanting to learn about investing. In the below comments section, I'm asking for you to chime in with advice you'd give to a newbie:

What would you add? Share your advice below. Learn on.

Fool.com managing editor Brian Richards doesn't own shares of any companies mentioned. The Motley Fool has a disclosure policy.