Shares of Icahn Enterprises hit a 52-week high on Friday. Let's look at how it got here and see whether clear skies are ahead.

How it got here
Since Icahn Enterprises is a holding company of assets from energy to gaming to real estate, it's important to understand the drivers taking hold over the past 52 weeks. Icahn's investments are very leveraged to the U.S. economic recovery, and as the economy has improved, so has the performance of the company's business units. But the biggest driver is Icahn's investments, which netted a $1.9 billion net gain on investment activities during 2011.

Driving shares more recently is Icahn's attempted takeover bid for CVR Energy , which led to a meeting between Icahn and the company's management.

Investment performance
Some of Icahn Enterprises' biggest holdings have had rocky performances over the past year, particularly Federal-Mogul . This stock holding hasn't performed well even though it has topped earnings expectations three of the past four quarters. Another holding, American Railcar Industries , has been flat over the past year. 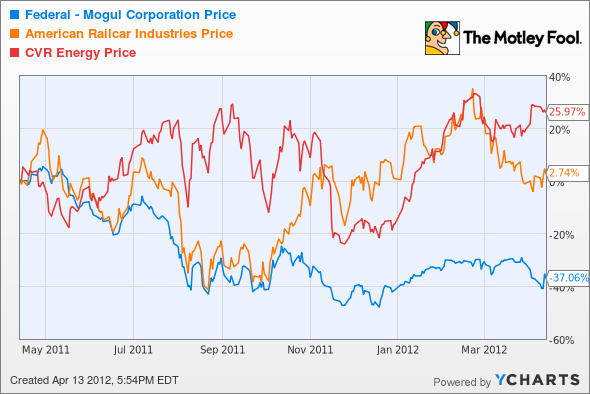 Trading risks
Since most of the company's earnings come from Carl Icahn's investments, there's always the risk that he makes a bad move. In the past year he posted a $1.9 billion gain from investments, and there are $8.9 billion of investments on the balance sheet. This is not only this stock's strength, but it's also the biggest risk.

What's next?
In the short term, Icahn Enterprises will probably trade based on the CVR deal, which Icahn could end up buying or giving up to management in a buyout. There's a poison pill in place, and talks with management could lead them to buy out his shares. Either way, it will probably be a profitable deal to Icahn.

Long-term, this is an opportunity to invest with one of the best investors of our age. You may not like his methods, but Carl Icahn has a track record of successful deals. I think the stock has legs to run, considering the leveraged nature of Icahn's bets on a U.S. recovery and his history of solid deals.

Interested in reading more about Icahn Enterprises? Add it to My Watchlist, and My Watchlist will find all of our Foolish analysis on this stock.