Shares of NRG Energy hit a 52-week low on Friday. Let's look at how it got here and see whether clouds lie ahead.

How it got here
There aren't a lot of positives to point to in the past year for NRG Energy. Of the company's four core operating segments, three of them had lower net income 2011 for both the fourth quarter and full year.

The overlying trend has been lower-than-expected demand in the company's wholesale and utility markets. The recession put a dent into demand and more efficient users have emerged, keeping demand low. Since NRG operates primarily in unregulated markets, where profits aren't locked in, these trends have a big impact on profits. Take a look at how much the company has underperformed Calpine and National Grid over the past five years. Calpine has struggled in the wholesale market as well, but National Grid's regulated markets have kept the company profitable. 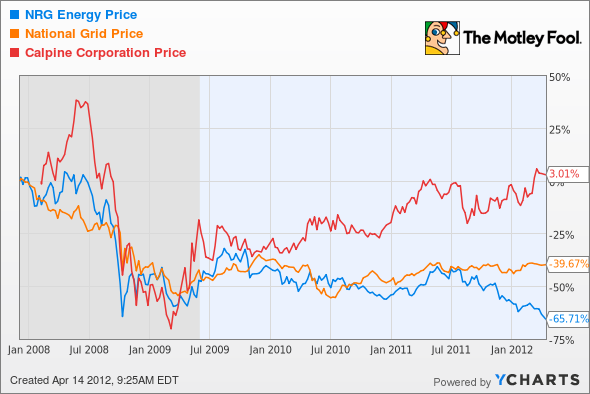 Strategy change
The past year has been tough, but NRG is in the midst of a strategy shift that could prove to be a catalyst for the stock. The company has made a big move into solar with ownership stakes in projects by both First Solar and SunPower . These deals come with power purchase agreements, meaning the developments should have a steady flow of revenue, barring any unforeseen problems.

What's next?
The challenges in the U.S. wholesale market aren't going to change anytime soon, because demand isn't likely to increase quickly. Completion of repairs at the company's nuclear plant should reduce losses, but I wouldn't expect a big turnaround in earnings.

I like NRG's shift to renewables because the cash flows will be consistent, but I'm not ready to make a bet on the company's other businesses. I'd wait to buy this stock until we see a move to into profitability and an improvement in the wholesale market, which could take a while.

Interested in reading more about NRG Energy? Add it to My Watchlist, and My Watchlist will find all of our Foolish analysis on this stock.