Shares of Brightpoint hit a 52-week low on Friday. Let's look at how the company got here and see whether cloudy skies are still in the forecast.

How it got here
The recent weakness in Brightpoint can be traced back to the company's first-quarter guidance issued in February, which pointed to a much weaker forecast than Wall Street had anticipated. The company, which is contracted to fix broken phones and download software onto them for wireless providers, warned that a mixture of losing a key customer and worse-than-normal seasonal slowness was expected to affect its profits in the first quarter.

The customer, which Brightpoint chose to keep nameless, accounted for 6.8 million handsets, or 8% of the total volume that the company's logistics division handles. The company is expected to reduce EPS by $0.02 to $0.06. However, the corresponding drop in the stock does seem a bit excessive, considering that many wireless providers and contractors like Brightpoint usually have tight relationships, so contractor switching is quite uncommon (i.e., this shouldn't be the norm). Brightpoint also dodged a bullet when AT&T discontinued its pursuit of T-Mobile, which could have further reduced revenue at the company's logistics division.

How it stacks up
Let's see how Brightpoint stacks up next to its peers. 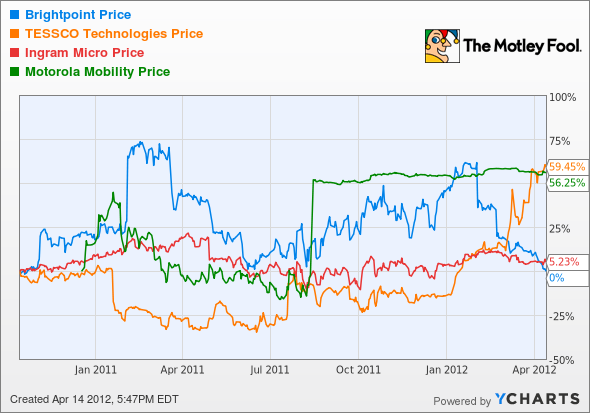 Aside from Motorola Mobility , which agreed to be purchased by Google, it has been a turbulent year for many of these contracted phone-service providers.

Being a contractor to the phone industry has both its ups and down. Cash-flow levels tend to be fairly predictable, but with few companies switching contractors, growth rates tend to be minimal. Ingram and TESSCO both offer incredibly attractive valuations, but their growth rates of just 3% and 4.9% over the past five years would leave a lot of investors craving more. Then again, with Brightpoint's investments in its distribution business, at least Ingram and TESSCO can claim to be cash flow-positive based on their latest annual report. Motorola Mobility looks like the only pricey one of the bunch, but that's a moot point with the company being purchased.

What's next
Now for the real question: What's next for Brightpoint? That question really depends on whether it can show Wall Street that losing a big customer from its logistics division was really just a fluke and it isn't the start of a trend. With more than 6 billion mobile phone subscriptions currently active worldwide according to mobiThinking's February 2012 report, there are plenty of opportunities for Brightpoint to prove itself.

Our very own CAPS community gives the company a four-star rating (out of five), with an overwhelming 325 of 337 members expecting it to outperform. I, too, recently made a CAPScall of outperform on Brightpoint and am currently down about 3 points on that call. The reason I think Brightpoint is a great value despite its cash outflow in 2011 has to do with both the rigidity of the contract industry, which discourages switching, and the increasing need for repairs and software servicing as the cell-phone industry grows and matures. I think Brightpoint represents an intriguing value here, and I believe Wall Street has overreacted to the company's profit warning stemming from its customer loss.

Craving more input on Brightpoint? Start by adding it to your free and personalized Watchlist. It's a free service from The Motley Fool to keep you up to date on the stocks you care about most.