Shares of Gap hit a 52-week high recently. Let's take a look at how the company got there and whether clear skies are still in the forecast.

How it got here
After a decade of stagnant sales, big discounts, and the wrong merchandise, the growth in same-store sales figures over the past few months would indicate that Gap may finally be turning the corner. Then again, a significantly warmer winter has made shopping a lot easier for consumers who had to deal with terrible weather last year, so there's definitely a "weather bump" being felt by the retail sector. As evidence to this, Gap rivals Ross Stores and TJX both reported March same-store sale increases of 10%, surpassing even Gap's 8% rise in same-store sales.

Gap's fourth-quarter results also failed to send the definitive signals that it's turned the corner. Net income for the quarter fell 40% as the company was forced to cut pricing to move undesirable merchandise. Still, from a value investors' perspective, Gap continues to deliver when it comes to its dividend. Following the quarter, the company announced an 11% boost to its quarterly payout.

How it stacks up
Let's see how Gap stacks up next to its peers. 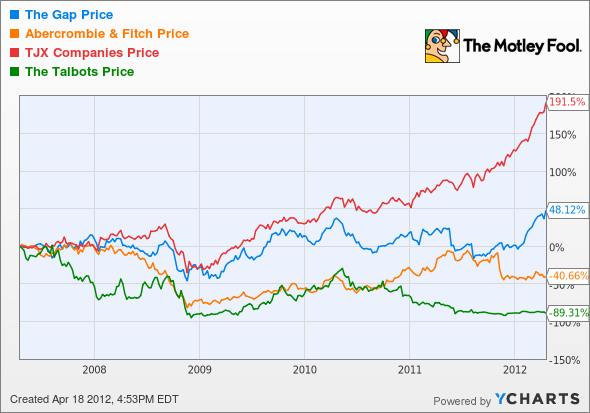 This chart serves as a stark reminder as to what can happen to shareholder value if a company continuously fails to put the correct merchandise in front of customers... eh hem Talbots .

Talbots' metrics serve as a concrete reminder that the wrong merchandise equals losses. Talbots is in the process of closing about 21% of its store locations as part of an ongoing restructuring effort. Gap, despite its recent success has a long way to go after sales have contracted by 1.8% annually over the past five years. It appears that traditionally pricier peer Abercrombie & Fitch represents a better overall value at just two times book value, and TJX offers a more consistent growth model than Gap.

What's next
Now for the real question: What's next for Gap? That question really depends on how Gap's customer respond once the warm weather conditions wear off and Wall Street gets a truer look at whether its customers are happy with the new product mix. If I had to venture a guess, I'm not sure this has happened yet.

Our very own CAPS community gives the company a two-star rating (out of five), with just 62.5% of members expecting it to outperform. I count myself among the minority here who has made a CAPScall of underperform on Gap and currently find myself down about five points on that recent call. I continue to doubt whether Gap has really gotten a stranglehold on what its customers really want. I think, instead, Gap has fallen into the perfect storm of easy same-store comparisons and value investors are just reaching for a reason to be excited about the stock. I may change my tune by the end of the year if Gap's earnings strengthen, but its latest quarterly report still indicated far too much discounting for my tastes.

Craving more input on Gap? Start by adding it to your free and personalized watchlist. It's a free service from The Motley Fool to keep you up to date on the stocks you care about most.