Shares promptly rallied 59% this year when the stock reached an all-time high of $644 less than two weeks ago. As I write, shares now trade near $560, a whopping $84 beneath that high -- a 13% pullback. For those keeping score at home, that's a market cap swing of $78 billion. That's nearly the entire value of Amazon.com, which currently sports an $85 billion capitalization. 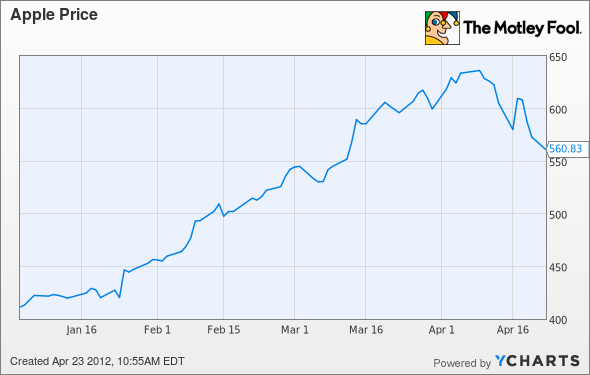 Tomorrow after the close, Apple is set to report its fiscal second quarter 2012. Expectations are high following the last earnings release. Will Apple hit or miss?

A numbers game
Starting with the basics, analysts are expecting the Mac maker to report revenue of $36.6 billion, which would represent 48% growth from last year. The estimates range as high as $41.1 billion to as low as $32.8 billion. Here's some visual context of how that would stack up. iPhone
Most are expecting Apple to sell roughly 30 million iPhones, although there's been some recent concern that Apple might miss that target. Some of the concern stems from recent data on iPhone activations at domestic carrier partner Verizon . Big Red recently disclosed that iPhone activations totaled about 3.2 million last quarter, a sequential drop of about 24%. The assumption underpinning this concern is that if Verizon's percentage of iPhone activations remains constant at around 11.4%, then that implies that Apple might only report unit sales of 28.2 million -- lower than the 30 million estimate.

That's a somewhat misguided assumption, as the iPhone 4S just launched this quarter in China, also adding China Telecom as a second carrier partner in the world's most populous nation. While China Telecom is the third largest in the country, it's another reason why Verizon's iPhone share should tick lower.

iPad
Unit sales for the iPad are expected to be about 12 million, which would be more than two and a half times how many were sold a year ago. Keep in mind that Apple already has 3 million iPad sales accounted for from the launch weekend of the third-generation model. The new iPad launched with only a couple weeks to go left in the fiscal quarter, so most of these sales would have come in before the new model arrived.

Most potential iPad buyers and Apple customers in general are now very familiar with the company's annual refreshes and launches, so some buyers may have postponed their purchases until the new model was released. There have been some supply constraints related to production of the new 9.7-inch retina displays, which are reportedly still persisting.

If a large number of would-be iPad buyers were delaying purchases in anticipation of the new model and weren't able to get their hands on one due to shortages, then Apple could potentially come up short with iPad sales. For example, this screenshot I took on March 14 showed iPad shipping times of upward of two to three weeks, which could put delivery of those tablets into April -- and into the next fiscal quarter.

Hoping for a miss?
If Apple "misses" tomorrow and shares continue to slide, I would definitely consider it a buying opportunity. The company's fourth-quarter "miss" led to a 14% pullback over the following weeks and would have been an enviable entry point (as low as $363) for Cupertino's long-term growth story. On top of that, income investors can look forward to the iDividend starting next fiscal quarter.

Stay tuned for my full breakdown of Apple's digits on Wednesday.

Apple is just one of "5 Stocks Investors Need to Watch This Earnings Season." This free report will also outline four other companies that should be on your radar, including one that competes head-to-head with Apple on one of its most important fronts. It's totally free.