Shares of Apollo Group hit a 52-week low today. Let's take a look at how the company got there and whether cloudy skies are still in the forecast.

How it got here
I'd like to tell you that the largest for-profit online education provider made the dean's list, but a series of goofs and poor earnings results has the stock suspended indefinitely from many investors' portfolios.

From a fundamental perspective, the entire for-profit education sector is feeling the pain of tighter government lending and increased competition, which means lower revenue and, in most cases, lower enrollment. Corinthian Colleges saw new enrollments drop 3% year over year, while ITT Educational Services experienced an even steeper drop-off of 13.5% in the fourth quarter. For Apollo Group, total student enrollment at the University of Phoenix dropped by 12.2% in the latest quarter, while revenue fell by 8%.

Apollo Group has also attracted the ire of the Securities and Exchange Commission, which informed the company that it is investigating possible insider trading from late February. Between the weak earnings and the SEC investigation, shareholders have had all they can take.

How it stacks up
Let's see how Apollo Group stacks up next to its peers. 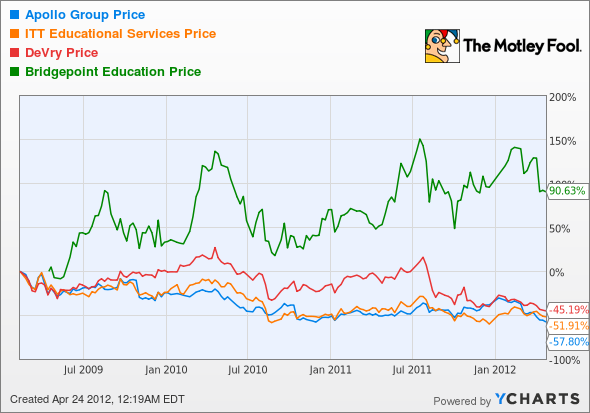 Bridgepoint Education has been a rare good apple with an increase in total student enrollment year over year, so it's no surprise that it's the best performer of the group.

Although the education sector appears cheap on paper, more stringent lending standards by the government have made student enrollments more difficult to bag. Compared with the poor enrollment numbers mentioned above (excepting Bridgepoint), DeVry takes the cake with a 24.6% nosedive in new student enrollment for its DeVry University. Apollo and ITT may seem like bargains, but they too are seeing large declines in enrollment. Bridgepoint continues to offer the best all-around value in the for-profit education sector.

What's next
Now for the real question: What's next for Apollo Group? That question is really going to depend on whether or not it can adapt to the new lending rules and clear its name of the current SEC insider trading investigation. I think school's out on these questions for at least the next few quarters.

Our very own CAPS community gives the company a two-star rating (out of five), with 84.9% of members expecting it to outperform. Although I have yet to make a CAPScall on Apollo Group, I tend to believe the company is fighting an uphill battle against increased competition and shrinking margins. This doesn't mean Apollo won't be attractive at some point in the future, because it has strong enough cash flow to remain profitable, but I'm still erring on the side of pessimism.

Craving more input on Apollo Group? Start by adding it to your free and personalized watchlist. It's a free service from The Motley Fool to keep you up to date on the stocks you care about most. Or, if you're looking for other opportunities outside of the for-profit education space, I invite you to learn about "The Motley Fool's Top Stock for 2012." I think you'll find it as exciting as I did!

At a New 52-Week Low, Is This Stock Cleared for Liftoff? @themotleyfool #stocks $APOL $ATGE $ZVO $ESINQ Next Article
Current