Being a former middle school teacher and son of a university professor, I became very interested in researching for-profit education when I became a full-time Fool in the spring of 2011. After spending time investigating the industry, I was convinced that an enormous percentage of big players were reckless at best, and scam artists at worst.

I encouraged readers to stay as far away from for-profit educators as they could -- though I was willing to admit there were some quality players in the industry. Since that article first appeared, the S&P 500 has returned about 34% including dividends.

Looking at six of the biggest players in the industry -- DeVry (NYSE:ATGE), American Public, ITT (OTC:ESINQ), Apollo (NASDAQ:APOL), Corinthian (NASDAQ: COCO), and Bridgepoint (NASDAQ:ZVO) -- you can see that shareholders in these companies haven't fared nearly as well. 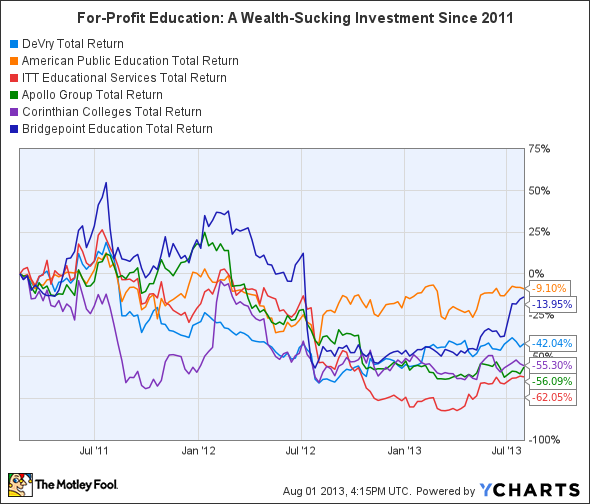 The average company in this cohort has lost 40% of its value, meaning that it has underperformed the market by a whopping 74 percentage points!

Over the coming days, I'll be investigating why the industry has had such a tough time. Today, I'm going to focus on one of the most important metrics investors in for-profit education should keep an eye on.

While looking at the total enrollment at a school is an important data point, I would argue that new student enrollment is the most prescient. It offers investors a look into the future of the school, and whether or not it is attracting enough new students to maintain its enrollment for the coming years.

Because each school reports its earnings at a different time, and has differing ways of segmenting the year, I took the most recent statement for each company of how many new students were enrolled, and compared it to the same time period from 2010. The results show that, on average, this cohort has about a quarter fewer new students enrolling than it did three years ago. 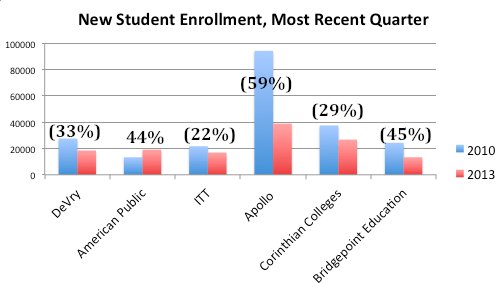 I'm not surprised that American Public was the sole school to add to its enrollment, as I singled it out as far and away the best player in the industry.

DeVry, ITT, and Corinthian have shown middling losses, while Bridgepoint and Apollo have had dramatic drop-offs. Bridgepoint, most notably, was in danger of losing its certification over these three years, while Apollo -- parent company of the University of Phoenix -- has seen its students leave in droves.

A perfect storm of trouble
In my opinion, there are three critical variables that converged to drive new student enrollment down so much at these schools.

The first was the fact that a Government Accountability Office investigation revealed appalling tactics that recruiters were using to get students to sign up. These tactics included lying on financial aid sheets in order to secure government funding. As a result, the Obama administration said recruiters' salaries could no longer be derived from how many students signed up, causing a severe drop in new student enrollment.

The second variable, which is closely related to the first, is the simple fact that the industry has received a ton of bad press over the past few years. As more and more stories of crushing student debt, coupled with questionable benefits for students, come out, many students have chosen to take alternative routes to education -- most notably through community colleges.

Finally, when the economy is in the dumps, going back to school becomes a popular option. Back in 2010, the unemployment rate hovered around 10%. Though it's not at a healthy level now, the current rate of 7.6% is much lower -- meaning lots of potential students are back on the job.

As I said, over the coming days, I'll be investigating how -- if at all -- these schools have cleaned up their act over the past few years, if enrolling in a for-profit school is worth it, and whether or not an investment in this beaten-down industry makes any sense today.