Last night, gadget maker Motorola Mobility reported first-quarter earnings, and the stock  didn't move at all. That's unsurprising, though, considering Motorola's digit release is strictly a formality at this point, as all eyes remain on the state of Google's pending acquisition of the smartphone and tablet vendor.

This may very well be Motorola's final earnings release before being swallowed whole, so let's take a peek at its figures for old time's sake.

Hello, Moto
Revenue inched up by 2% to $3.1 billion in the first quarter, while its GAAP net loss widened to $86 million, or $0.28 per share. On a non-GAAP basis, that net loss gets trimmed down to $10 million, or $0.03 per share. Motorola's operating loss nearly doubled to $70 million.

Motorola shipped 8.9 million mobile devices in the quarter, of which 5.1 million were smartphones, a million more smartphones than it shipped a year ago. Motorola launched its RAZR MAXX during the quarter, which packs in a massive battery to boost battery life for the 4G LTE device. For me, one of the more interesting aspects of the release was what Motorola didn't say: tablet shipments.

Secrets, secrets, are no fun
Up until now, Motorola had always disclosed how many tablets it was shipping. Throughout all of last fiscal year, Motorola shipped almost a million Android tablets. In each quarter, it reported tablet shipments of approximately 250,000, 440,000, 100,000, and 200,000, in that chronological order. There's some rounding involved, so don't expect those figures to add up exactly a million.

I can only guess that tablet shipments this quarter were so embarrassingly low that they weren't worth reporting. Amazon.com just reported its own earnings last week and opted not to disclose Kindle Fire shipments as usual. I suppose the reason for that omission must be that Amazon's figures are embarrassingly high (embarrassing for the rest of the Android tablet market, that is). comScore estimates that the Kindle Fire comprises 54.4% of the Android tablet market, while the Motorola Xoom has just 7%.

Goodbye, Moto
On to what investors really care about: Googorola. Google's $40-per-share offer remains on the table, which is why shares don't even flinch from the earnings release, which technically missed the Street's targets.

The last regulatory man standing continues to be China. Antitrust regulators in the U.S., European Commission, Canada, Israel, Russia, Taiwan, and Turkey have all given the deal a stamp of approval, and shareholders naturally approved the deal long ago. The Chinese Ministry of Commerce proceeded to the second phase of its investigation in March, and it's still pending.

Both Motorola and Google continue to "work closely with the authorities in China for approval," and the would-be duo still expects to seal the deal during the first half of the year.

What Google actually wants
On the patent front, Motorola just scored a German victory against Microsoft , winning an injunction against the Xbox 360 and Windows 7 in the German market -- although Microsoft said there wouldn't be any immediate effect thanks to a separate injunction it won against Moto.

Apple also recently lost a preliminary International Trade Commission ruling against Motorola regarding a patent on voice and data transmission -- although Apple CEO Tim Cook has expressed interest in settling the Android disputes.

Why Street analysts earn big bucks
In a purely redundant move, Canaccord Genuity has followed up the results with a research note today, reiterating its "hold" rating on Motorola, complete with a $40 price target. As if investors really needed a professional analyst to read the press release for them and restate the obvious.

In actuality, though, Motorola shareholders should have sold their shares long ago. After the offer was announced in August, shares expectedly popped to almost the offer price of $40, closing out that day at $38.13. Investors looking to hold on until the bitter end could only enjoy a maximum upside of 5%, but they'd have to wait an unknown amount of time to get there.

On the downside, if the deal fell through for antitrust or any other reasons, the share price would have likely cratered as well. Remember, shares were less than $25 the day before the announcement. That's a disproportionate risk/reward ratio if you ask me, when you can easily cash out for nearly the full offer price. 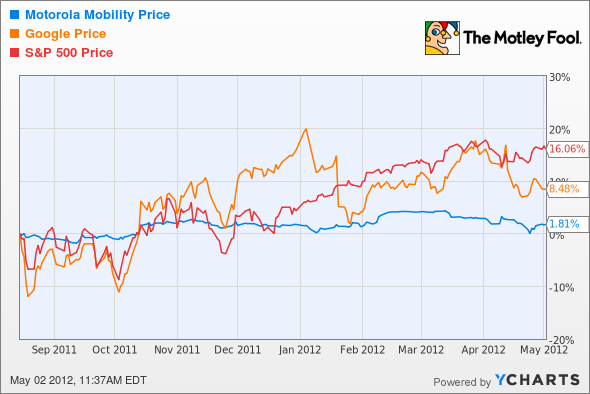 This chart shows how Motorola has performed since that fateful day. Indeed, investors would have been much better off moving on to greener pastures. Investing in Moto's would-be parent would have paid off better, while simply putting that money in the broader S&P 500 would have even topped the Google alternative.

There are probably only a few months to go, so say your farewells to Moto now while you still can.

The mobile revolution sure is worth fighting over, seeing as how it will be The Next Trillion-Dollar Revolution. While the bigwigs duke it out in patent courts, one company is looking to gain momentum with an inside track. Get the free report now.