Shares of Garmin hit a 52-week high yesterday. Let's take a look at how the company got there to find out whether clear skies remain on the horizon.

How it got here
Garmin's earnings came in yesterday, and investors must have liked what they saw. The company beat expectations on the top and bottom lines, but net margins clocked in a bit lower than they had been in the year-ago quarter. Despite constantly critical drumbeats of GPS makers' imminent demise at the hands of Google Maps, Garmin is still profitable, still paying a surprisingly large dividend for the tech sector, and still making moves into niche services such as fitness devices and marine navigation. Shares are up over the past year, but have been flat for the past five after a huge run-up lost steam heading into the recession: 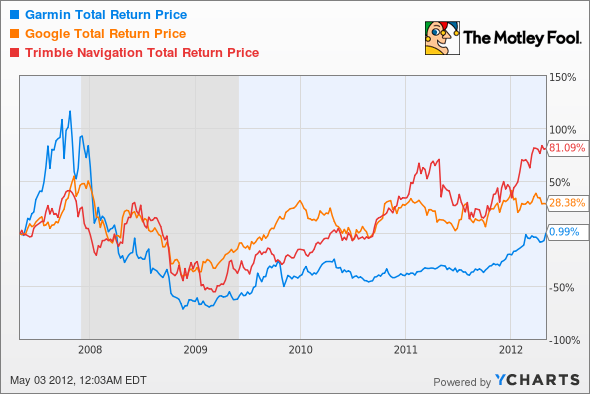 Investors who got in a year ago have enjoyed 45% gains, and the stock has nearly doubled in the past three years, not a bad haul for a company once left for dead in the navigation wars.

What you need to know
Garmin is still reasonably priced at the moment, with a current P/E right in line with the search titan many thought would spell its doom. On the other hand, its bottom line has dwindled, while both Google and other navigation companies have enjoyed solid earnings growth:

TeleNav, which primarily partners with wireless carriers, has enjoyed the fruits of that relationship through the smartphone boom. Trimble's focus is more on mapping and surveying, though it competes with Garmin in marine navigation. The market seems to give it better chances of long-term success despite its lower margins, since it trades at more than twice Garmin's current valuation.

The company's revenues are also down somewhat from where they were in 2009, but profits have dropped at a faster rate thanks to larger operating expenses. In spite of that decline, the company's stock is recovering from a P/E that was once in the single digits -- the stock's gains have largely been matched with a higher P/E over the past two years: 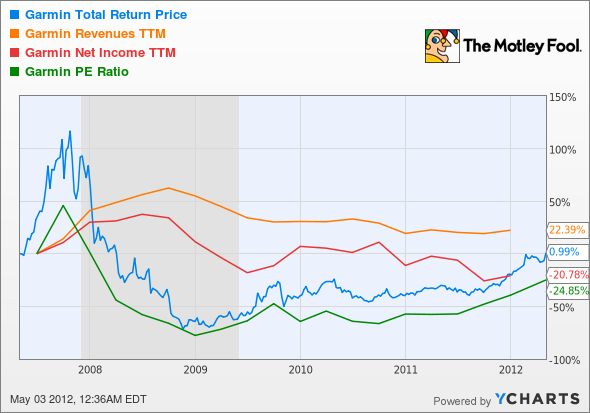 But there is good news: The company's fitness segment was a big leader in first-quarter gains, with revenues up 26% and operating income doing even better with a 34% year-over-year improvement. Garmin also crossed the 100 million mark in the first quarter, having moved that many devices since its first product went on sale in 1991. Much of that growth, despite greater challenges, has come since 2007, as Garmin sold 75 million of its 100 million products since then. However, as fellow Fool Jeremy Bowman points out, personal navigation devices are already starting to suffer from lower sales.

What's next?
Where does Garmin go from here? That will depend on how the consumer market shakes out. Keep in mind that fitness-based tracking devices are becoming incredibly popular, with Nike's FuelBand selling out quickly on release despite its rather pedestrian capabilities. I wouldn't be surprised if the fitness-device segment actually becomes more competitive than real-time navigation in the near future.

The Motley Fool CAPS community doesn't seem to believe that Garmin can keep moving higher, giving it a mere two-star rating, with 9% of interested members expecting the stock to underperform in the future. I agreed with these bears earlier in the year, placing an underperform CAPScall on Garmin in March for the reasons I've outlined here. This outperformance might continue -- but it's hard to justify it, given the headwinds Garmin faces.

Still hungry for big gains? Take a look at The Motley Fool's latest free report on "The Next Rule-Breaking Multibagger," featuring one company that could leave Garmin and much of the rest of the market in the dust. Click here for the information you need to buy your next big gainer.