Shares of Nike hit a 52-week high recently. Let's take a look at how the company got there to find out whether clear skies remain on the horizon.

How it got here
Nike broke through a ceiling that's lasted since mid-March, though there wasn't any particularly worthwhile news to drive the recent gain. However, the stock's now up nearly 19% since the beginning of the year, and there's been plenty of good news to encourage investors over the past few months. Over a longer timeline, it's been even more encouraging, performing better than most fitness apparel companies -- with the obvious exception of lululemon , of course: 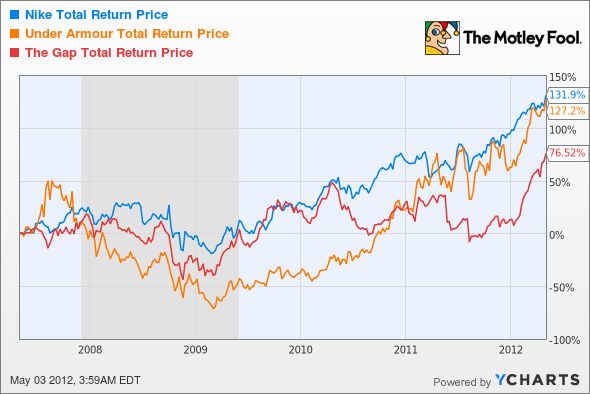 Since the start of the year, Nike's FuelBand fitness tracker has become a big hit with tech-friendly workout freaks, opening a new avenue of potential growth. The company also bested analyst estimates in its most recent quarter. Nike investors then had a lot to digest in April, as Nike was upgraded to a buy rating by Benchmark Company, prepared for its first season as the licensed NFL equipment supplier, and earned top marks for employee relations.

What you need to know
On a valuation level, Nike might not seem so cheap, but when compared with its peer group, it looks like a bargain:

Nike's earnings haven't grown as rapidly as either Under Armour's or lululemon's, but it's had a much longer runway to take off from and has long since reached cruising altitude. Gap, while slightly less costly, has both much weaker earnings growth and an inferior net margin. Gap's chosen to take direct aim at lululemon rather than compete with Nike and Under Armour in the broader sports-performance market with its Athleta brand, which should ultimately help Nike (and its much better brand recognition) as it seeks to jump into the same yoga-centric segment.

Under Armour is Nike's greatest threat, but as you've seen earlier, intense competition has only boosted both stocks over the past five years. Nike's biggest advantage in this contest is its broader international appeal and commitment to growing its brand overseas. The company also has a nice lead in wearable fitness technology, a market Under Armour hasn't yet made any serious effort to pursue.

What's next?
Where does Nike go from here? That will depend largely on its continued international strength, at least in the near term. It may take some time for its wearable tech to become a major contributor, but that is also an exciting opportunity -- albeit one with a further horizon. The Motley Fool's CAPS community has given Nike a four-star rating, with more than 2,000 members expecting the stock to continue its 52-week trend.

Nike's ready to rule the world, but it's not the only company with global ambitions. Find out about two other great companies with big international plans in The Motley Fool's latest free report. Click here to find out more about these opportunities at no cost today.