One of the key decisions businesses must make is how to prioritize their primary stakeholders -- employees, customers, and investors. And while many insist that consumers or shareholders should come first, I'm inclined to believe that great businesses begin with great employees, especially customer-facing companies like retailers. Only by focusing on employees can companies ensure the satisfaction of the other two stakeholder groups. Well-selected, trained, and motivated workers will provide superior customer service, ensuring healthy sales, which can then be returned to investors.

A look at Glassdoor.com, a website featuring employee ratings and reviews of their companies, would seem to confirm this theory. There are four publicly traded retailers on the top 50 list of best companies to work for: Costco , Starbucks , Nordstrom, and Coach , all with scores of 3.5 or higher, and three of them have significantly outperformed the S&P 500 over the past five years: 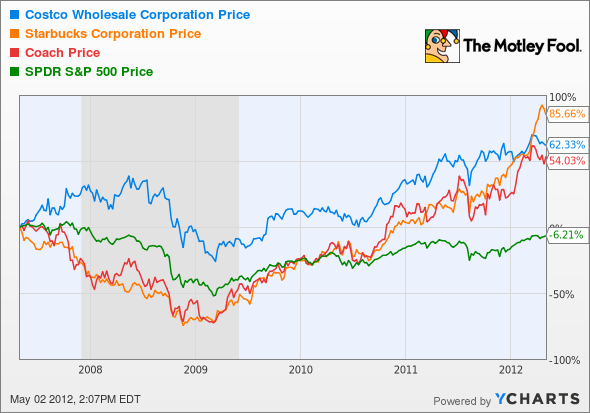 While the broad-market index lost value, all three retailers provided solid returns over the period. Let's take a closer and see how these companies' employee-focused strategies are helping them beat the competition.

The world's largest membership-club chain
The strength of Costco's brand can be seen in multiples such as its P/E ratio of 25. In an age where Amazon.com and others in the online channel are encroaching on traditional retailers, a P/E double that of the S&P 500 reflects investor confidence in the sustainability of Costco's model.

Costco's employees are of course a valuable part of that value chain. The warehouse king pays, on average, much higher than competitors such as Wal-Mart, but those wages also give it one of the lowest turnover rates in the retail industry. As a further incentive, the company also offers health-care benefits to 90% of its workforce and makes its priorities clear by spending no money on advertising. Recently departed CEO Jim Sinegal sees this strategy as an advantage: "Imagine you have 120,000 loyal ambassadors out there who are constantly saying good things about Costco. It has to be a significant advantage for you."

Employees seem to agree. The company ranks No. 23 on Glassdoor.com's list of the best companies to work for. "For a place called work, it's the very best," one employee said, citing excellent pay and benefits, a fun environment, and six weeks of paid leave every year. Others echoed the sentiments and seemed particularly happy about getting paid time-and-a-half on Sunday. One employee described his experience as "the best care from a company ever."

The company that made coffee an experience
In what's essentially a commodity business, Starbucks has soared past competitors such as Dunkin' Brands, Peet's Coffee, and Caribou Coffee. Top-notch customer service has been one of the key drivers in its brand domination, as it regularly ranks near the top because its employees ensure that advantage. Competitive wages and health benefits ease the hiring process and encourage employees to perform. Starbucks' decision to offer health benefits to employees working 20 hours a week or more is also a rarity in the restaurant industry, and it's worth comparing Starbucks' reviews with those of its peers.

While most of the coffee siren's employees cite benefits and an enjoyable work environment as reasons to work there, employees at Dunkin' Donuts complained about a lack of advancement opportunities, and several McDonald's workers complained of poor job satisfaction. Unlike many of its competitors, Starbucks doesn't franchise, which allows it greater control of its hiring and training process, as well as the ability to standardize all employee-related practices and create a company culture. At chains that franchise, employee satisfaction will vary widely, depending on the franchise running that particular store.

It even works with handbags
Shares of handbag maker Coach have shot up nearly 1,000% over the past 10 years and are worth more than six times what they were at their post-recession bottom. The company has succeeded with a strategy of offering high-quality products at mid-range prices.

Not surprisingly, employees seem just as pleased as shareholders and customers. One 18-year retail veteran described Coach as "a breath of fresh air," adding that the pay beats competitors, stores are not micromanaged, and employees have plenty of incentives. This reviewer also noted that its turnover was much lower than that of other retailers. Others applauded the generous employee discounts and "small business feel" despite working for a $20 billion corporation.

Like the other companies on this list, Coach's approach to its employees fits in with its overall business strategy. For the fifth year in a row, Coach was named best customer service by the Luxury Institute in the handbag and accessories category. The Institute's CEO called "customer experience the battleground of the 21st century," and with the superior service, it's clear that Coach is at an advantage.

You've seen the best; now try the rest
Just as satisfied employees are a hallmark of great companies, so can dissatisfied ones clue you into stocks to avoid. Radio Shack rates just a 2.4 on Glassdoor, and the stock trades near 52-week lows at a time when the broad market is pushing four-year highs. Of course, electronics retail has been upended by the likes of Amazon, but the Shack's employees provide a unique window into a distressed company. Many of them complain of unreasonable sales goals, pushy management that often threatens to fire them, and a lack of flexibility. Their reviews seem to indicate management's desperation to boost sales and that the ship is sinking.

Another struggling retailer, Sears Holdings' Sears stores, receives a rating of just 2.5. While its stock has nearly doubled this year, that's a factor of a beaten-down stock attempting to unlock value through selling real estate and spinning off brands rather than actually improving operations. Sales have continued to decline, and the company has closed stores recently.

One employee complained about a lack of direction from management and said it had no clear-cut business model, suggesting that management was overwhelmed by the number of business units and recommending liquidating assets. Others were unhappy with the low pay and lack of benefits and said management didn't understand basic customer needs.

Notably, both of these companies have spent heavily on share buybacks and dividends instead of using that cash flow to rehabilitate their core businesses.

It's important to remember, of course, that employees are just one of many factors influencing a stock's performance, but these examples should show that it's worth checking up on what the people who know your company best have to say about it.

One more way to play retail
Several factors are changing the face of retail, among them the explosion of emerging markets. One company taking advantage of these trends is a fast-growing Latin American retailer that's using Costco's proven price-club model. Our chief investment officer even called it his "Top Stock for 2012," and you can get the inside scoop right now in our special free report.