Shares of PriceSmart hit a 52-week high on Friday. Let's look at how it got here and whether clear skies are ahead.

How it got here
PriceSmart has been outperforming rivals on the stock market partly due to its relatively small size and because of its growing presence in emerging markets. While adding stores in Central or South America will have an impact on the likes of Wal-Mart and Costco , it has a huge impact on PriceSmart, which only operates 29 warehouse clubs right now.

The company’s international focus helped drive same-store sales 17% higher in March and 17.6% higher for the first three months of the year. Growth of sales at the few stores it has will need to continue because the company isn’t exactly expanding like gangbusters. Only six new stores have been opened in the last five years.

On the market, PriceSmart has left Wal-Mart and Costco in the dust. The company has outperformed these rivals not only over the last year, but over the last five years as well. 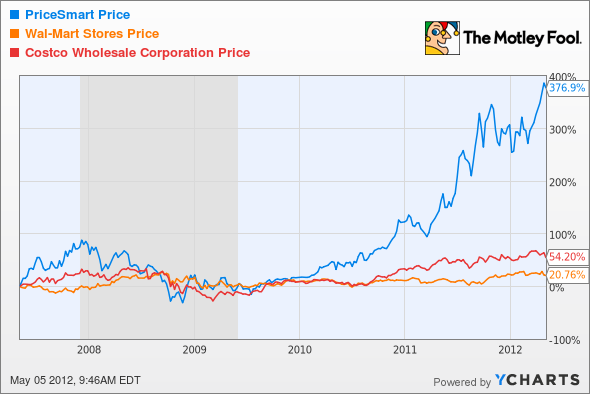 The stock has been on a tear and the market has rewarded it with a lofty earnings multiple. So far, it’s been worth it because of the growth the company has generated.

So, the company may need to start opening stores at a faster rate to live up to these multiples.

What's next?
Where does PriceMart’s stock go from here? That depends on whether the company can keep up its current growth rate at its existing stores and open new ones. The table above indicates that it will at least need to outperform rivals to stay on top since it’s a bit pricy by comparison. The danger with stocks priced like this is that they can tumble if growth doesn’t live up to expectations.

The CAPS community thinks the stock will continue to be a winner, giving it a four-star rating, and 475 out of 493 players give the stock an outperform rating. I’m a little more cautious and would like to see more store openings before jumping in.

Interested in reading more about PriceSmart? Click here to add it to My Watchlist, which will find all of our Foolish analysis on this stock.

Fool contributor Travis Hoium does not shop at any of the companies mentioned or have a position in any of their stocks. You can follow Travis on Twitter at @FlushDrawFool, check out his personal stock holdings or follow his CAPS picks at TMFFlushDraw.