Shares of Vertex Pharmaceuticals recently hit a 52-week high. Let's take a look at how it got there and see whether clear skies remain in the forecast.

How it got here
For a company that's been perpetually on the auction block, according to many investors (myself included), Vertex seems to be doing just fine on its own. Two key pipeline factors have Vertex soaring to the heavens in what has been a generally great year for biotechnology stocks.

First, Vertex offers the current best in class hepatitis C drug, Incivek. It resoundingly defeated its closest competition in Merck's Victrelis; Incivek has been able to clean up. This isn't to say that Vertex is going to have free reign of the hepatitis C space because Gilead Sciences' experiment hepatitis C drug, which does not need interferon, GS-7977 -- acquired when it purchased Pharmasset -- has completely removed the virus in 88% of patients in a remarkably short 12 weeks. Other smaller players exist as well, like Idenix Pharmaceuticals , whose experimental drug IDX-184 eliminated the virus in 100% of patients in a recent study but took twice as much time as GS-7977.

Secondly, Vertex's potential cystic fibrosis treatment Kalydeco is showing considerable promise in mid-stage study when combined with another experimental drug in its pipeline VX-809. With 70,000 people afflicted with the disease worldwide, about half of which contain a key mutation, Vertex has a shot at cornering what would become a very profitable treatment.

How it stacks up
Let's see how Vertex Pharmaceuticals stacks up next to its peers. 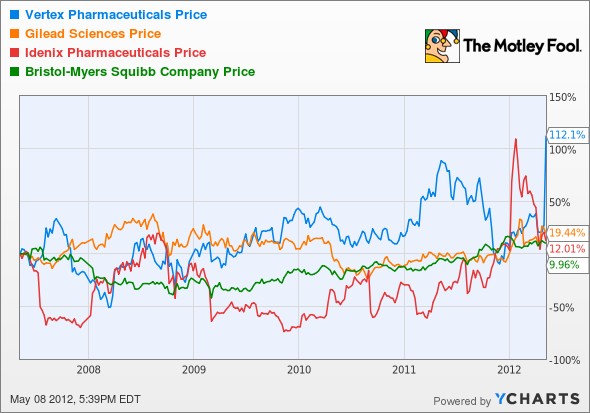 It's been a bumpy ride, but Vertex has really pulled away from its peers in the past few days on the Kalydeco news.

I've often been told that subjecting biotech companies to standard financial metrics is a hopeless act, but humor me -- I find it amusing and thought-provoking.

Idenix doesn't have a marketable product yet, so its revenue steam relies solely on collaborative revenue -- thus the 36.4% annual decline over the past five years. Gilead and Bristol offer considerably more extensive pipelines than Vertex, which comes with both good and bad news. On the bright side, portfolio diversity shelters these two from becoming the victim of one or two stocks coming off patent. On the downside, growth for these two is often much slower than a company like Vertex that's off and running with its blockbuster Incivek. Suffice it to say that all three offer something to biotech investors with their individual pipelines.

What's next
Now for the real question: What's next for Vertex Pharmaceuticals? The answer is going to greatly depend on the success of Kalycedo as it marches through clinical trials and whether Incivek sales can hold up in light of the incredible success of Gilead's GS-7977, Idenix's IDX-184, and even Bristol-Myers' acquired hepatitis-C hopeful from Inhibitex, INX-189. Not to mention that GS-7977 and Bristol's daclatasvir paired up for a 91%-100% early cure rate.

Our very own CAPS community gives the company a three-star rating (out of five), with an overwhelming 91.4% of members expecting it to outperform. Although I have yet to officially lay down my opinion on Vertex in the form of a CAPScall, I'm still leaning toward the company outperforming over the long run.

Vertex will continue to remain on buyout watch for as long as I follow that company. It possesses a potentially revolutionary cystic fibrosis treatment that could capture the lion's share of the market if the drug is successful, and its hepatitis C drug Incivek is clearly the best choice available based on drugs currently approved by the FDA. Although no drug approval is a certainty, it does look like Gilead's GS-7977 is going to streamline itself right onto the FDA's lap sometime soon with the results it's been producing, and it's quite possible Vertex could be facing some strong competition within the next few years.

Until then, Vertex looks like a strong growth stock that is being hampered as a buyout candidate only by its recently inflated valuation. While I'm not ready to make a CAPScall of outperform on the stock as of yet, I will reconsider my position if a pullback ever resurfaces.

If you'd like the inside scoop on three more stocks that will help you retire rich, then simply click here for access to our latest special report -- it's free!

Craving more input on Vertex Pharmaceuticals? Start by adding it to your free and personalized watchlist. It's a free service from The Motley Fool to keep you up to date on the stocks you care about most.