One research firm proposes a cure for what ails investors suffering from the "massive supply hangover" that has absolutely roiled the dry bulk sector since late 2008 by serving up a homemade Bloody Mary on the morning after. According to Global Hunter Securities, relief will be found in the hair of the dog that bit you.

Shipping analysts at Global Hunter this week issued buy recommendations (in bulk) for dry-bulk by initiating coverage on 12 shippers, including eight bullish calls to accompany the hypothesis that "dry bulk is at the low point of an extreme boom-bust cycle." The Baltic Dry Index, which tracks dry-bulk vessel charter rates, revisited during the first quarter of 2012 the extreme weakness of the low, initial reaction of the infamous 2008 collapse. The shipping stocks have drifted along a rocky seafloor, and the following one-year chart shows the trailing carnage in gruesome detail. (I'll spare you the horror of the five-year chart!). 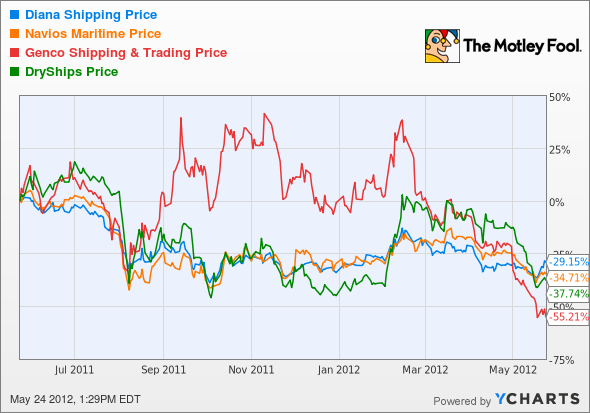 Given that the corresponding target prices for popular favorites Diana Shipping and Navios Maritime Holdings fall within their respective 52-week trading ranges, even a modest easing of the extremely depressed market conditions experienced of late could be seen to give these boldly counter-cyclical calls a reasonable shot at success.

As for a $6 price target for DryShips , implying a 164% advance, that is certainly a courageous call considering CEO "Curious George" Economou's special knack for obliterating shareholders with shocking extremes of debt and dilution. For those with an extremely high risk tolerance, I offered the stock as "the greatest gamble in stocks" in early 2011, but Economou continued to raise the ante by pursuing a ceaseless counter-cyclical-growth agenda that raised its long-term debt burden by 92% to reach $3.8 billion by the end of 2011! A full 85% of fourth-quarter operating income was gobbled up by $48.2 million in interest payments. Nonetheless, high-profile lenders continue to enable DryShips' aggressive growth addiction, and the diverse fleet of dry bulkers, tankers, and drilling rigs does make a powerful armada indeed.

Testing the waters for fundamental improvement
Nearly four years into the sector's incredible collapse, it may seem tempting to start looking ahead to a less acute oversupply condition within the global vessel fleet. But that ship has not yet come into port, so any positioning in these stocks at this stage implies a decidedly speculative and high-risk maneuver no matter how compelling the distressed valuations may appear. Let's go for a swim and test the waters with an updated snapshot of the fundamental picture.

Without question, the world's dry-bulk fleet remains in acute oversupply mode. After comparing data from two recent analyst reports, I find that roughly 100 million deadweight tons (DWT) of new hauling capacity is expected to hit the seas during 2012, representing a 16%-19% expansion of the global fleet. Even after accounting for the scrapping of older vessels, the anticipated net increase still comes in at about 13%-15%. With dry-bulk demand growth seen in the 4%-8% range, it appears the oversupply condition will worsen by 5%-11% in 2012 from the already horrific glut that bludgeoned this market over recent years. Fortunately, the influx of new orders for vessel constructions has been falling since early 2011. According to one report, the worldwide order book for new vessels in February 2012 represented 28% of the existing fleet; but that's a welcome decline from the prior-year reading when the order book stood at 45% of the existing fleet.

Even as the data begins to thaw, I note the glaring absence of one key indicator that I have awaited throughout this bear market in bulk to signal the potential bottom of the cycle. I consider Diana Shipping the greatest operator in the space, and throughout this downturn the company has deliberately retained a polished balance sheet and ample available liquidity for the purpose of executing a strategic growth spurt near what the company deems the bottom of the business cycle. To date, Diana has made only modest moves to expand and update its fleet, and I have seen no indication of the sort of wholesale, opportunistic shopping spree that I continue to anticipate once its insightful management team believes that the worst is either upon them or behind them. When Diana Shipping finally opens the valve and begins to expand its fleet in earnest, I will emerge as a selective buyer in dry bulk. If you'll bookmark my article list or follow me on Twitter, I'll be sure to let you know when that occurs.

The ace up China's sleeve
While the oversupply condition will not abate overnight, the recent affirmation by China that it will sustain its massive infrastructure build-out offers welcome support. China's commodity demand remains a critical component to any expectation of attaining balance between vessel supply and demand in the intermediate term. Moreover, as the world at-large shifts from its brief discussion of austerity into growth-stimulation mode, I would not be surprised to find China capitalizing on the opportunity to soften its own landing with another round of commodity-focused stimulus. If that occurs, not only will I move swiftly to increase my existing investment stakes in would-be beneficiaries Teck Resources and Peabody Energy , but I might also be inclined to then join Global Hunter Securities in forecasting smoother waters ahead -- at very long last -- for select forlorn shippers of dry bulk.