The recent market swoon offers up a buying opportunity for investors.

In an effort to become a source that you can profit from, I've been trying my best to Moneyball my stock picks for the world to see. I put $40,000 into the World's Greatest Retirement Portfolio last summer, and it's beating the market by 18 percentage points. I also created the World's Greatest Growth Portfolio at the beginning of the year, and that too is beating the market, this time by over 12 percentage points.

I don't think it's worth resting on these laurels, though. Neither one of these portfolios has been around for more than a year; it's long-term success that I'm shooting for, here.

While that may temper my excitement, it also provides some solace. You see, nine months ago, I started picking one stock per month that I'd be investing my Roth IRA money into. That portfolio hasn't performed as well as I'd hoped, losing to the market by 4 percentage points.

This month, I'm laser-focused on improving this performance by taking four high-quality companies into consideration. All four are trading for far cheaper now than they will in a decade. Below, I'll show you why, and at the end, I'll offer you access to a special free report about this year's tech IPO that's worth buying.

Heckmann
Richard Heckmann is a serial entrepreneur with a record of outstanding results -- especially when it comes to water management systems. That's why I'm excited to let Fools know about his latest venture: Heckmann Corp. The company aims to be a one-stop shop for all the water needs of the natural gas and oil industries.

Because the fracking techniques used by natural gas companies require so much water, there's high demand for companies that can provide, dispose of, and purify water used in the extraction of natural gas. Heckmann spent millions of dollars building out an infrastructure that included water pipelines, a trucking fleet, and hard-to-obtain injection wells to meet demand.

Unfortunately, just as soon as the infrastructure was in place, natural gas prices plummeted. Some companies -- like industry leader SandRidge Energy -- decided to cut back on production. Though revenues were up big for Heckmann, the company didn't meet expectations, causing the stock's 50% fall since late December.

But here's the thing: Heckmann recently diversified its exposure to the energy industry. Whereas in the past it was overly reliant on the natural gas sector, it has a much broader base of revenues now.

There's absolutely no telling what the spread between oil and natural gas will be in the future -- and it's sure to fluctuate. There are two things, however, that I am relatively certain of: our world will need more energy moving forward, and extracting that energy will require water service companies. Heckmann is the niche's first mover, and with this kind of diversification, I think its market cap will be far higher in the not-so-distant future than today's $540 million.

Apple
There's not a whole lot for me to add on Apple that hasn't already been dissected ad nauseam already. The growth of Apple's dominance in the technology sector over the past decade is the stuff of legends.

With huge growth prospects in new iterations of the iPhone and iPad both domestically and abroad, the company is trading for a dirt-cheap 14 times earnings and 11 times free cash flow.

IPG Photonics
Last month I purchased shares of this fiber-optic laser maker. The company came out with earnings, popped almost 20%, and then fell below where it started. Click here to see why I responded by saying that the company was entering the "screaming buy" territory.

Worries about a global slowdown are certainly valid, considering IPG's lasers are used primarily in heavy industry. But the fact of the matter is that in 10 years, IPG's lasers -- which are cheaper, more powerful, and equally reliable than their older carbon-based counterparts -- will likely be dominating the field in 2022 -- making today's market cap of just over $2 billion look cheap.

National Oilwell Varco
I've written about National Oilwell before, too. The long and short of the investment thesis is actually quite simple: The company provides all of the tools and do-hickeys necessary to extract energy from the earth -- whether that be oil or natural gas. Last quarter, the rig technology sector showed particularly large increases, growing revenue by 40% from the same time last year.

But if you want to know a good way to think about National Oilwell, consider how closely the company's stock price mimics that of a barrel of crude oil. 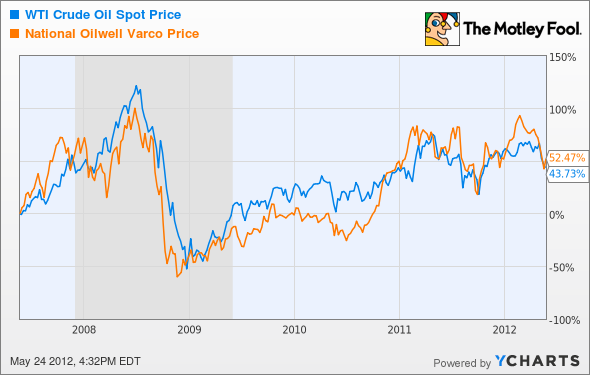 In the most basic sense, I believe that demand for oil -- especially from emerging economies -- will only grow moving forward. Therefore, I believe National Oilwell is an excellent company for energy investors.

Next week, I'll be letting you know which of these four will be getting my investment dollars.

Ignore the noise
One of the most important things in becoming a good investor is ignoring the noise provided by the financial media and focusing on what makes sense to you. No company has been making more noise lately than Facebook, but we here at the Fool think buying shares is a silly use of capital right now.

We've prepared a report detailing why we think so, and offering a better place to part your hard-earned cash: Forget Facebook -- Here's the Tech IPO You Should Be Buying. Inside, you'll get the name of a company you're probably already familiar with -- and find out why it's a buy today. Get your copy of the report today, absolutely free!