There's simply no denying how important energy is not only to our economy, but to our very existence. If we need it to live, your portfolio should have it, too. Now is a great time for investors to take a closer look at energy stocks, many of which sit at compelling prices after May's market drubbing. Below I've outlined five stocks to diversify an energy-less portfolio.

NOV is the world's largest rig equipment company, and it has a lot to gain from the growing interest in offshore drilling. Since 2000, the global deepwater rig count alone has increased from 20 to 200 -- and more are on the way.

That being said, independent producers tend to be much more volatile than the integrated majors. Not only do these firms typically track the price of oil, the market often reacts strongly to any hint of bad news or disturbance in production. Consider the performance of Continental and ExxonMobil from the middle of March through the market's miserable May: 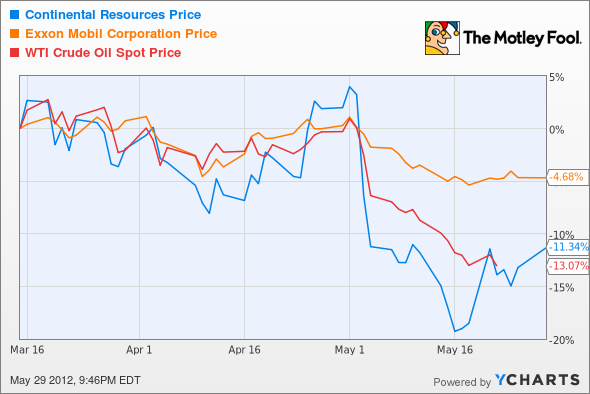 Continental tracks the West Texas Intermediate spot price of oil pretty closely, while Exxon more or less weathered the storm. Year to date, Continental is outperforming the Big Oil behemoth, but investors should acknowledge that volatility factor before buying in.

The toll road: Pembina Pipeline
Pembina's shares are down slightly since they first began trading on the New York Stock Exchange on April 2. However, the long-term outlook is good for Canada's third-largest midstream company.

The first quarter of 2012 was a big one for Pembina. The company closed on its acquisition of Provident Energy and joined the NYSE. From an operations perspective, systemwide volumes were up 15% year over year. Earnings were down because of expenses related to the Provident acquisition; if those expenses are excluded, earnings grew $0.10 per share. Revenue climbed from $140.6 million Canadian last year to $176.4 million Canadian in 2012.

The tangential play: Du Pont
The American Chemistry Council has high hopes for American chemical exports because of the low price of U.S. natural gas, and dollar exchange rates in developing economies, both of which benefit DuPont.

Additionally, the company expanded its footprint in the industrial biotechnology and biofuels market with its acquisition of Danisco last year. This gives DuPont the ability to cash in on energy in two ways: using cheap natural gas feedstock for its chemicals, and building a strong presence in alternative energy fuels.

The chemical giant is up over 5% year to date, and its future outlook is strong.

The hedged bet: BP
BP is one of the largest oil companies in the world, and although it recently ended its solar power development initiative, it maintains its work with wind power and biofuels. That commitment to alternative energies provides a hedge against its traditional fossil fuel business.

In 2007, BP announced it would invest $500 million over the course of 10 years in the Energy Biosciences Institute. The Institute is run by the University of California Berkeley and the University of Illinois and is dedicated to researching advanced biofuels, as well as converting hydrocarbons into cleaner fuels.

Foolish takeaway
The energy industry offers a ton of options for investors looking to diversify their portfolios. If your portfolio is already chock-full of energy stocks (brilliant!), consider checking out nine more ideas with the Fool's special free report, "Secure Your Future With 9 Rock-Solid Dividend Stocks."