You've heard the story of the canary in the coal mine, right? Miners would bring a canary with them into the mine because if there were high levels of poisonous gases, the bird would meet its end before they would and the miners could escape before being harmed. The figurative canary died long ago, warning rough times were ahead for coal stocks, but some investors insist on pushing ahead anyway.

U.S. demand began to fall once the price of natural gas plummeted, old plants started to be decommissioned, and our hope for exports to China faltered when the country began aggressively pursuing its own mines.

The picture hasn't gotten any brighter recently. In the latest Electric Power Monthly report, the Energy Information Administration said that net generation from coal declined 21.3% in March 2012 from a year earlier. To put that in context, overall generation fell 2.9% and natural gas rose 40.2%, coming closer to edging out coal for the top generation source.

Coke demand hasn't picked up the slack for diversified producers either. China only imports about 10% of its coking coal supply, and despite being the world's largest producer, it will only import about 50 million tonnes of the 240 million tonnes of exports available last year, a disappointing development for exporters. The picture just doesn't seem to be improving quickly enough for producers.

Whose fault is it?
The industry would like to blame President Obama for the fall in coal's usage, but the biggest driver has really been natural gas. The EIA says that the price for natural gas electricity fell 7.5% in 2011, and with the price of natural gas likely to remain low for the foreseeable future, I don't see this trend changing. This has forced a big change in coal electricity generation. Since 2010, plant owners have said they will close 106 coal plants, so the industry is in for anything but a bounce in demand.

What's really killing coal is that plants are ancient, with over half built before 1967. The economics to build a new coal plant versus using natural gas and even renewable sources just doesn't make sense anymore, and power generators are abandoning the fuel source slowly but surely.

Even one of the biggest coal users, Duke Energy , has begun to turn its back on the industry, preferring cleaner, less costly forms of energy.

A value, or a value trap?
Despite falling stock prices, coal still has its backers. When I wrote an article on April 5 titled "It's Time to Abandon Coal Stocks," I was blasted by readers who thought I was crazy. Since then, the bottom has fallen out from under coal stocks, particularly Patriot Coal , Alpha Natural Resources , and Arch Coal . 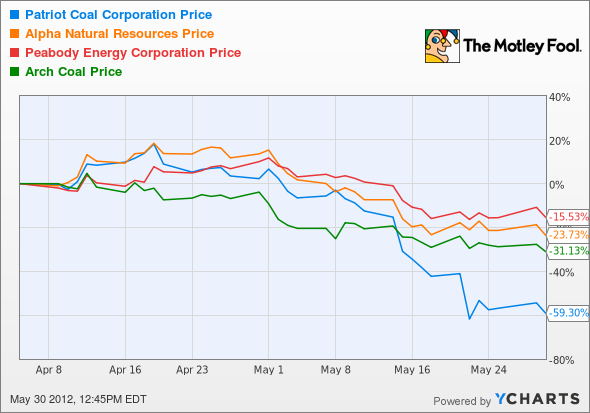 Even the top performer, Peabody Energy , has underperformed the market by nearly 12 percentage points after my CAPScall.

You may be able to look at these stocks and see some value. Price to book value looks attractive on some level, but the warning signs are still there.

Revenue growth at three of the four was accounted for by major acquisitions during 2011, without which these companies would look even worse. Outside of Peabody, the hope for profit in 2012 has vanished, and even Peabody's estimates are falling quickly.

Now is not the time for a value play
Coal is the past in energy, and while it will play a role in making steel, I don't see this driving stocks forward in the near future. More plant closures will surely take place in coming years, followed by mines closing, and financials will continue to get worse.

Coal stocks may not be winners, but we've identified one energy stock that is. Check out which stock we've picked in our free report highlighting the only energy stock you'll ever need.

The Canary Is on Life Support and Coal Stocks Are Too @themotleyfool #stocks $BTUU.Q $DUK Next Article
Current