Shares of Juniper Networks hit a 52-week low on Friday. Let's take a look at how it got there and whether cloudy skies are still in the forecast.

How it got here
With so much emphasis being placed on smartphones, tablets, and the need for instant Internet gratification, it's a little odd to see network-equipment makers Juniper, along with its larger rival Cisco Systems , trading near their lows.

Telecommunication providers Verizon and AT&T significantly cut back and/or delayed their plans to expand their existing broadband networks in the fourth quarter of 2011 and European broadband providers have significantly curtailed their spending in light of Europe's woes. This perpetuated a serious note of caution concerning order growth from both Cisco and Juniper, and really put a crimp in the bottom lines of less-diversified networking providers Tellabs and Alcatel-Lucent . With little visibility as to when spending may pick up, many of these switch and router makers are racing to new lows.

Not all hope is lost, however, as a surprise profit from networking equipment provider Ciena lit a spark under its shares. The company noted increased visibility in the second half of the year, which prompted it to forecast considerably better growth than the first half.

How it stacks up
Let's see how Juniper Networks stacks up next to its peers. 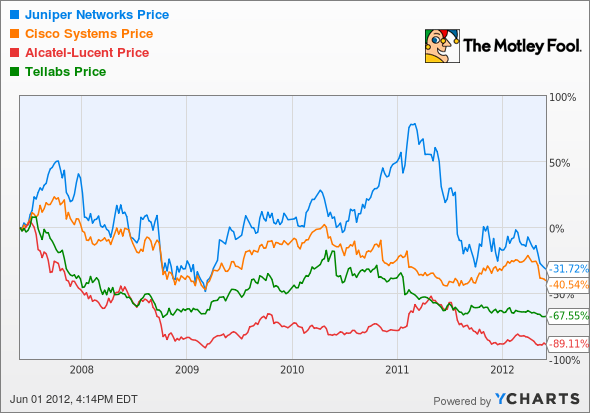 The tech sector may have rallied strongly off its 2009 lows, but you wouldn't know it by looking at networking stocks.

One aspect to understand about the networking sector is these metrics only tell half of the story.

Alcatel-Lucent, for example, might appear to be an intriguing value at just eight times forward earnings and roughly 60% of book value, but it's in the middle of a multiyear restructuring and has a lot of its business tied to the European market -- a market that's arguably in much worse shape than the United States.

Tellabs, which might seem pricey at nearly 55 times forward earnings but has a far greater presence in the U.S., appears to be a better buy than Alcatel-Lucent. Tellabs' results may be spotty over the past couple of years, but it pays a 2% dividend and has been aggressively repurchasing shares. It's not my favorite in this group, but it has far fewer problems than Alcatel-Lucent.

Really, this is a two-horse race between Cisco and Juniper. According to Juniper's chief technology officer, Pradeep Sindhu, Juniper is gaining market share on rival Cisco, but both are facing huge inroads if U.S. telecom companies don't step up and begin spending. At the moment, it looks like Juniper offers the best growth opportunity while Cisco offers more risk-averse investors a good entry point into the stock.

What's next
Now for the $64,000 question: What's next for Juniper Networks? The answer is going to depend on whether telecom spending slows further and if the situation in Europe takes a turn for the worse. Juniper's business is well-diversified, but patience among its investors is waning.

Our very own CAPS community gives the company a two-star rating (out of five), with 87% of members expecting it to outperform. I, too, have made a CAPScall of outperform on Juniper and currently find myself negative on that call by 32 points. My resolve, however, remains unchanged.

Juniper's and Cisco's fates are largely linked at the hip, even though the two companies are in completely different phases of existence. Juniper is still a growth company with a cash-rich balance sheet, while Cisco is more of a value-oriented company that's slowly directing its products toward next-generation devices. Both represent extremely enticing values at present, but for different reasons. Given the strength in the smartphone and tablet market compounded with Juniper's $2.4 billion in net cash, it's not a company I would consider betting against.

Just as I'm scouring around for the next great tech stock, our team of analysts at Stock Advisor has identified three stocks to own for the next Industrial Revolution. Find out their names for free by clicking here to get your copy of our latest special report.

Craving more input on Juniper Networks? Start by adding it to your free and personalized watchlist. It's a free service from The Motley Fool to keep you up to date on the stocks you care about most.