By the end of trading on Wednesday, the Dow Jones Industrial Average had recorded its largest gain of the year, closing out the day 286 points, or 2.4%, higher.

Although this may sound counterintuitive, the reason it rocketed upward was essentially that the global economy continues to flounder. Unemployment in the United States unexpectedly increased. China's economy is slowing down. And parts of Europe are on a collision course with the Dark Ages.

What is quantitative easing?
Quantitative easing is a fancy and less controversial way of saying that the Federal Reserve is going to effectively print money by buying long-term, typically government, bonds -- in normal open market operations, the Fed buys short-term bonds. Many people think it's used because, as a popular video on YouTube puts it, "printing money is the last refuge of failed economic empires and banana republics, and the Fed doesn't want to admit that this is their only idea."

Now, that's probably taking it a little too far. But it makes a valid point: Quantitative easing, or printing money, whatever you prefer to call it, is one of the methods the Fed uses to spur the economy. Most other means of support, principally fiscal stimulus, must be undertaken by the executive or legislative branches -- yeah, I know, fat chance of that.

Since the onset of the financial crisis, the Fed has already resorted to this on two occasions.

The first, known as QE1, began in November 2008 and didn't end until March 2010. Among other things, the Fed cut the key interest rate to near zero and purchased $1.25 trillion of mortgage-backed securities.

The second, known as QE2, occurred between November 2010 and June 2011. This time, the Fed purchased $600 billion in long-term Treasury bonds to push down long-term interest rates -- which are now, not coincidentally, at historically low levels.

While there have been rumored reports of a third round of easing essentially since QE2 ended, everything came to a fruition last week. As my colleague Eric Bleeker noted, on June 1, Morgan Stanley raised its estimates of the likelihood of new federal stimulus from 50% all the way up to an 80% probability.

Quantitative easing and the Dow
Although it's impossible to predict the precise impact on the Dow of an additional round of easing, 2010 serves as a useful and optimistic guide in that regard.

At the annual Fed conference in August of that year, Fed Chairman Ben Bernanke announced what would subsequently become known as QE2. With respect to equities, the thought was that the decrease in bond yields would induce bondholders to gravitate toward stocks.

Before the announcement, the Dow had been floundering about. It expanded between February and April, only to then contract through May and June. After the announcement, however, it began a consistent march upward, rising by 15% between August and the end of the year. 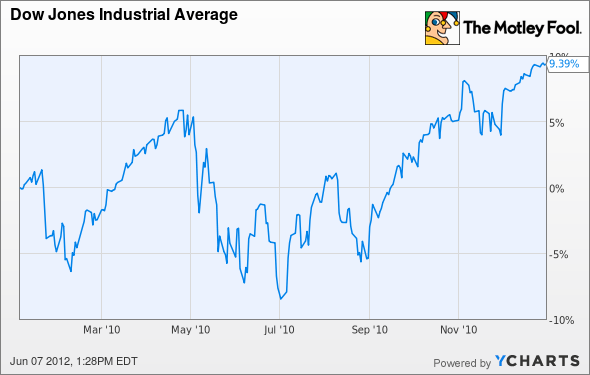 To be sure, as economist Martin Feldstein noted, "There is no proof that QE2 led to the stock market rise. … But the timing of [it], and the lack of any other reason for a sharp rise in consumer spending, makes that chain of events look very plausible."

Some of the biggest beneficiaries at the time were heavy-equipment manufacturers that sell things on credit. For example, Caterpillar , General Electric , and Boeing , ended the year up 64%, 22%, and 19%, respectively. In essence, the low interest rates ignited by quantitative easing made these companies' products -- like heavy equipment, jet engines, and commercial airplanes -- less expensive for consumers to buy. And although it's not in the Dow, Deere is currently experiencing the same thing. Despite the economic malaise here in the United States, it recently reported a 12% increase in net sales and revenue on the back of higher demand for tractors.

Foolish bottom line
While trying to predict what the Fed will do is generally a fool's errand, in the event it does pull the trigger on another round of easing, it seems clear that the Dow and its underlying components stand to gain considerably. For an example of three specific stocks that are bound to benefit from it, check out our recently released free report: "3 American Companies Set to Dominate the World."