Shares of Altria hit an all-time high today. Let's take a look at how it got there and see whether clear skies are still in the forecast.

How it got here
Altria's fresh 52-week high today is an indication of the stability and pricing power behind the tobacco industry.

Altria has a few factors going its way that never seem to change. For one, it's a safe-haven investment that produces strong cash flow every quarter. Safe investments are important now more than ever as European worries and China's slowdown are hitting a very unsettled market. Altria's consistent cash flow is also used to pay out what is currently a dividend yielding 5% that has grown by 8.6% annually over the past three years. Finally, Altria has brand recognition and pricing power, and both are crucial to success in the consumer-goods sector. Despite numerous efforts to increase taxes on tobacco by state governments, Altria continues to sell its tobacco products because people crave its iconic Marlboro brand.

However, Altria isn't without its challenges. Advertising campaigns by the Centers for Disease Control and Prevention, as well as a push from the Food and Drug Administration for better ingredient transparency of cigarettes, threaten Altria's future customer base. While it hasn't come to fruition as of yet, the possibility that warning labels could dominate tobacco producers' packaging remains a distinct possibility.

Perhaps the biggest concern for Altria should be the recent growth of discount brands that threaten to eat into its higher-margin Marlboro brand. Lorillard's Maverick, Vector Group's Liggett, and Reynolds American's Pall Mall brands represent cheaper alternatives to Marlboro, which could be a problem given how cost-conscious American consumers have become since the recession.

How it stacks up
Let's see how Altria stacks up next to its peers. 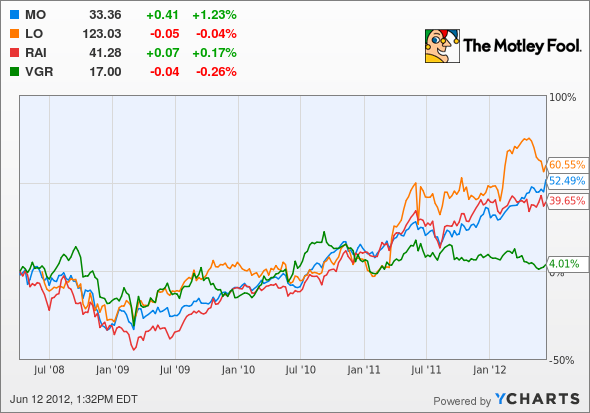 With the exception of Vector Group, whose small cash balance gives it less flexibility than its larger counterparts, the remaining three have traded very much in tandem with one another.

There are two factors that all four of those tobacco stocks share. First, they operate strictly within the United States, so they are all equally exposed to the stringent federal and state laws that govern tobacco sales. Second, they're all dealing with extremely high levels of debt.

Although Vector Group's net debt is only $240 million, that's enough to wipe out all shareholder equity if the company were liquidated. It's also cause for concern if the company were to face a multitude of what are seemingly inevitable lawsuits in the sector, since it has only $285 million in cash on its books.

Lorillard has been the strongest performer in the tobacco sector, garnering market share at its peers' expense. Adjusting for fluctuations in trade inventory patterns, volume grew by 1.8% as Lorillard's market share ticked up 40 basis points to a record 14.5%. Its premium Newport brand gained 50 basis points of menthol market share.

Finally, we have Altria and Reynolds American, which have both taken to cutting their workforce over the coming years to curb expenses, maintain robust shareholder return initiatives, and bring volume more in line with demand. Altria's latest quarter demonstrated rare market-share gains for its Marlboro brand of late, but it still didn't stop overall volumes from falling.

What's next
Now for the $64,000 question: What's next for Altria? That question is going to depend on whether it can buoy its premium Marlboro brand with a beefier advertising budget, if its discount brands can lure customers away from its peers, and if it can keep its expenses under control considering it has more net debt than any of its peers.

Our very own CAPS community gives the company a highly coveted five-star rating, with a whopping 96.4% of nearly 9,000 members expecting it to outperform. Consider me among the minority, as my CAPScall of underperform on Altria is currently underwater by 18 points. Don't, however, look for me to close that pick anytime soon.

To me, it seems obvious that Altria's growth days are in the past. The company is spending an inordinate amount of money on advertising to buoy its Marlboro brand in light of a trend toward discount brands. Lorillard has been much stronger on the premium brand front than Altria and is one of the few tobacco companies able to grow cigarette volumes in the United States. And why would you even consider investing in the U.S., considering its strict tobacco regulations, when you could just as easily get international exposure with Philip Morris International , which sells its products in 180 countries and sidesteps severe tobacco regulations in many parts of the world? I maintain that Altria makes a decent sell-side candidate here.

Even if tobacco stocks aren't the right investment for you, you might be interested in reading about three companies our analysts at Motley Fool Stock Advisor believe will outperform in the emerging markets. Get your copy of this latest free special report.

Craving more input on Altria? Start by adding it to your free and personalized Watchlist. It's a free service from The Motley Fool to keep you up to date on the stocks you care about most