Shares of Amgen hit a 52-week high on Wednesday. Let's take a look at how it got there and see whether clear skies are still in the forecast.

How it got here
Amgen, the world's largest biotechnology firm, has predominantly benefited from offering investors exposure to a broad pipeline of drugs, as well as the safety of being in an industry where demand is assuredly going to rise as technology improves and baby boomers age.

In the company's latest quarterly report, Amgen reported moderate sales growth of 7% for Enbrel, its rheumatoid arthritis and psoriasis drug, which it attributed to more aggressive marketing, and a 9% increase in Neupogen and Neulasta, which are given during chemotherapy to fight infections. These three drugs accounted for 57% of Amgen's first-quarter sales. The strength behind these key drugs is what allows it to be one of just a handful of biotechnology companies that pays a dividend.

Not everything is perfect, however. Amgen has really struggled to innovate and grow its pipeline over the past few years and has targeted international growth and acquisitions to remedy its woes. It recently announced a collaboration with AstraZeneca to jointly develop a clinical-stage inflammation portfolio and also acquired Micromet and KAI Pharmaceuticals within the past quarter. Although its newest drugs, Prolia for osteoporosis, and Xgeva, which is used to prevent fracturing in cancerous bones, have shown steady growth since their launches, its slowly growing pipeline has significantly lagged behind peers like Biogen Idec .

How it stacks up
Let's see how Amgen stacks up next to its peers. 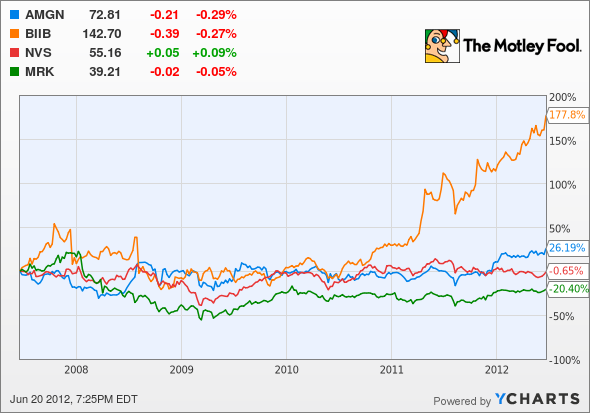 Aside from Biogen Idec, which has run away from its peers, the sector has tended to trade in tandem, with Merck performing the worst of this group over the past five years.

Aside from Biogen Idec, which has benefited from successes in the multiple sclerosis and autoimmune markets, the companies are similarly valued. It also should be noted that Biogen Idec has the quickest non-acquisition-related growth rate of the group, but is also the only non-dividend-paying stock.

Novartis and Merck are really neck-and-neck for cheapest valuation in this group, but both are facing near-term patent hurdles. Novartis is set to lose exclusivity on high-blood-pressure treatment Diovan in September and expects generic competition to present a viable challenge to its pipeline in the immediate future. What it does offer is a rock-steady 4.6% yield. Merck is slated to lose patent exclusivity on Singulair in August; it currently supplies about 11% of total revenue. Unlike Novartis, Merck's pipeline of drug hopefuls just might be able to fill the void that Singulair is leaving behind. Merck's yield is also a healthy 4.3%.

Finally there's Amgen, which delivers a moderate 2% yield and has, by all accounts, a steady pipeline, but it's failed to truly expand that pipeline by much over the past five years.

What's next
Now for the $64,000 question: What's next for Amgen? The answer is largely going to depend on whether Amgen can kick-start its pipeline through acquisitions. New drugs Xgeva and Prolia are a good start, but it's going to take significant new drug growth (probably overseas) to back up any further appreciation in Amgen's stock price.

Our very own CAPS community gives the company a four-star rating (out of five), with 92.2% of the members who rate it expecting it outperform.

I haven't personally made a CAPScall in either direction as I feel Amgen's product diversity and 2% yield shield it from moving much to the downside, while its lack of organic innovation and weak growth over the past five years limit its upside. A lot rests on Xgeva and the possible deals it may strike overseas. Amgen is a premier biotechnology company and it's worth adding to your watchlist and revisiting in six months.

Amgen clearly has a pipeline that's changing lives. If you'd like the inside scoop on a stock our Motley Fool Rule Breakers team feels could offer the next revolutionary product, then click here for your free access to our latest report.

Craving more input on Amgen? Start by adding it to your free and personalized watchlist. It's a free service from The Motley Fool to keep you up to date on the stocks you care about most.