The iPhone turned 5 today. Upon reaching that age, most young ones enjoy milestones such as learning to read and write or being able to tie their own shoes. For the iPhone, its half-decade milestone is that it's now become a $70 billion business.

They grow up so fast
Apple
launched its now-iconic device back in June 2007, and has subsequently reshaped the entire smartphone industry. Just about every successful smartphone nowadays is built with a capacitive touchscreen, a departure from the hardware keyboards made popular by Research In Motion and its BlackBerrys in the years before it.

The product family has been built up one model per year at a time, each progressively occupying different strategic price points. Through the first calendar quarter, Apple has now sold a cumulative total of 218.1 million iPhones since its inception, and this rate is dramatically accelerating; just over half of them (109.5 million) have been sold in the last four quarters alone. With all the iPhones Apple has sold in the second quarter, that figure should be approaching 250 million. The iPhone has generated $71.4 billion in sales over the past four quarters, thanks in part to the generous carrier subsidies that it's able to extract for the device that keeps its average selling prices much higher than rivals'. Many mobile device makers would love to see overall top lines that high, yet Apple is able to generate all those sales from just a single product lineup. It has quickly become the single most important product to Apple's incredible success over the past few years, generating half of trailing-12-month sales. Even the iPod, one of Apple's most significant achievements in the past decade, never reached this level of significance. That device's contribution to TTM sales topped out around 40% in 2006, and has fallen dramatically ever since as a planned and expected victim to iPhone cannibalization. The iPod certainly wasn't the only casualty of the iPhone.

Juvenile delinquents
Three of the most visible victims to the iPhone have been none other than Nokia , Research In Motion, and Palm -- three companies that were once synonymous with smartphones yet are now empty shells of their former selves. This chart starts on the original iPhone launch. 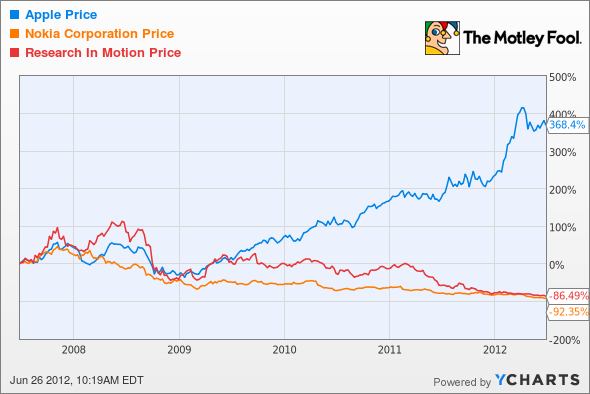 Palm in particular is literally no more, swallowed whole by Hewlett-Packard for $1.2 billion, which has resulted in nothing more than massive investor indigestion. Even having a former Apple exec, Jon Rubinstein, in charge wasn't enough to turn the tables. Today, HP still has no smartphone strategy, although it's making a big tablet push with Microsoft Windows 8 later this year.

Nokia's business has been crumbling for years, and the clock is ticking for a turnaround, but partner Microsoft isn't doing the Finnish company any favors, excluding current devices from being able to upgrade to the newest operating system that will be released later this year. That was enough to cause T-Mobile's German arm to stop offering the device.

RIM initially blew off the iPhone, with former co-CEO Jim Balsillie saying, "It's kind of one more entrant into an already very busy space with lots of choice for consumers. ... But in terms of a sort of a sea change for BlackBerry, I would think that's overstating it." If you ask me, I'd say that losing 86% of its value over five years falls squarely under the "sea change" category.

It's not just a coincidence that when the first iPhone was unveiled, RIM, Palm, and Nokia were all among the devices that Steve Jobs displayed that he considered lackluster offerings at the time. Microsoft similarly dismissed the device at the get-go, with CEO Steve Ballmer literally laughing at the proposition, believing that it "doesn't appeal to business customers because it doesn't have a keyboard, which makes it not a very good email machine." At the time, he added, "Right now we're selling millions and millions and millions of phones a year. Apple is selling zero phones a year. In six months they'll have the most expensive phone by far, ever, in the marketplace. Let's see how the competition goes."

Instead of six months, we're now five years out, so let's see how this competition is going.

And so it goes.

Who do you want to be when you grow up?
Apple has defined the direction of the entire smartphone industry with the iPhone. The capacitive touchscreen is ubiquitous now. Even RIM is wising up and one of the first BlackBerry 10 devices won't have a hardware keyboard, a nearly blasphemous idea. Both flavors will be offered, but the tides are turning.

The iPad is off to an even more promising start, and isn't even half the age of its smartphone brethren. It's got quite a role model to look up to, but at the rate that it's going it might very well become the favorite child. We're just now seeing the beginning stages of tablet adoption, and with Apple leading the way you might be wondering if you can still buy Apple, even though it's now the largest tech company in the world. Lucky for you, we've got the answer in a brand new report. After you're done there, grab a copy of this free report on American companies dominating the world, much like how Apple now generates the majority of its sales internationally. It's totally free.