Shares of Costco hit a 52-week high on Monday. Let's look at how it got here and whether clear skies are ahead.

How it got here
Foolish favorite Costco simply continues to execute without missing a beat, so much so that investors can set it and forget it and trust that the company will deliver as usual. Membership fees rose 9% last quarter, which is particularly important because they comprise the bulk of operating income while its gross margins primarily go toward covering operating expenses. Same-store sales came in slightly lower than analysts had expected, but on the bright side, it grew its gross margins.

The quarter before that was similarly strong, thanks in part to the affordable gas prices it offers that help bring members in to do some shopping. Its focus on member service and satisfaction mean those membership fees should keep on rolling in.

How it stacks up
Let's see how Costco stacks up with its retail and e-tail peers and rivals: 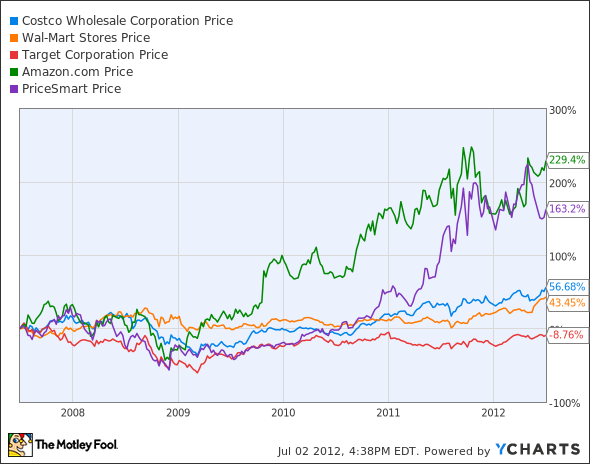 We'll throw in some fundamental metrics for more insight.

One key difference between Costco and traditional retailers like Wal-Mart and Target is that Costco has more of a relationship with its members, who find Costco's service valuable enough to pay for. While Wal-Mart has Sam's Club, its namesake stores aren't likely to instill this type of loyalty. In a way, you could also think of Amazon's Prime service as having a similar effect in that customers pay annual fees and end up constantly coming back for more, thanks to the included free shipping. PriceSmart is taking a page out of Costco's playbook and expanding into Latin America.

What's next?
Costco recently transitioned to a new CEO after founder Jim Sinegal stepped down. The Motley Fool's own founder and CEO Tom Gardner sat down with him for his take, but there's every reason to believe that Costco will continue growing internationally and satisfying its loyal member base.

The face of retail itself is changing, and there are two companies in particular leading the way and disrupting traditional retailers. Grab a copy of this free report to read more.