Mark Reeth
(TMFWreath)
Author Bio
Mark Reeth is an incredibly handsome Consumer Goods editor, and is an expert on all things that fall within the Consumer Goods sector (especially video games). Follow him on Twitter for all of the most important CG news.

The world is in turmoil; Europe is breaking, China is braking, and investors are uncertain of where the market is heading next. Some even believe that a second recession is on the way, and many are unsure of where to invest in these tumultuous times. So what's the best sector for the savvy investor to put his hard earned money into? The surprising answer is retail. 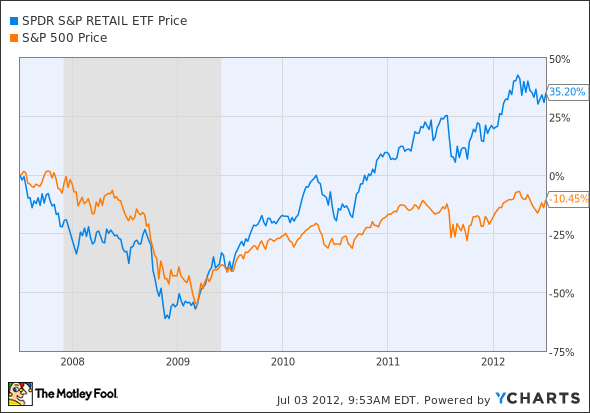 Retail fo' sho'
Retail stocks fell only marginally more than the broad market during the Great Recession, but they rocketed out from the depths faster than the broad market and have continued to outpace the index in 2012. Many investors are afraid that if the market turns bearish, retail will be one of the first industries affected by tightened purse strings. But you Fools know that the best time to buy is when others are afraid. Here are three clothing-focused retail companies that everyone seems to be scared of, creating the perfect buying opportunity for you.

Coach is a first-class stock
Every now and then a stock comes along that is not only poised for extensive growth over time, but that the rest of the market also undervalues. Coach , which bills itself as "America's preeminent designer, producer, and marketer of fine accessories and gifts," is one such stock.

Coach has been pushing into two new major spaces: Asia and men's retailing. According to the company's recent earnings report, things are progressing nicely; gross, operating, and net margins have all increased over the quarter. Furthermore, the company opened five new locations in China, making the total number of stores there 85. The report also shows that Coach is increasing its inventories, often a no-no for retail stocks; however, Coach needs this increase to fuel growth, and inventories should be reduced once it finishes expanding.

Coach's stock price has steadily declined since reaching its 52-week high in mid-March. It seems other investors are afraid that the stock price can't get any higher, but the company's financials are excellent, and it still has a ton of room to grow. Coach is probably being found guilty by association with other hard-hit luxury retailers like Tiffany and other jewelers that have taken it on the chin recently. That's great news for the patient investor who sees this dip in a quality stock as a buying opportunity.

You're going to like the way this stock looks -- I guarantee it
Shares of Men's Wearhouse , much like the company's suits, are starting to look very reasonably priced as they trend lower in recent weeks. This downtrend is thanks to a disappointing first-quarter earnings report on April 28, in which Men's Wearhouse not only missed on earnings expectations but also lowered guidance for the second quarter. Also of note is the 16.4% rise in inventories year over year, a growth that the company says is necessary to replenish oversold inventory. Despite this unfortunate report, Men's Wearhouse is still projecting 13%-17% growth this year and still has plenty of cash and no debt.

Most importantly, the company continues to deliver a dividend yield of 2.70%, much higher than the industry average of 1.50%. The dividend has increased significantly over the past few years, rising from $0.05 in 2006 to $0.18 this past quarter; that's a whopping 260% jump over the past six years. Yet despite the huge increase, the company still has a payout ratio of only 23%. And the figure will remain low while Men's Wearhouse funnels most of its resources into growth for the near future, but if the company hits its growth estimates this year, you can expect the dividend to increase even faster than it has these past few years.

There's no lid on this stock's price -- because the company owns Lids
A perfect buying opportunity often arises when bad news for one company affects similar companies, and such is the case for Genesco . A leading retailer of shoes and hats, Genesco had a fantastic first quarter; the company beat EPS expectations by $0.24 ($0.98 per share instead of the projected $0.74) and improved gross, operating, and net margins by 1%, 4%, and 3%, respectively. Still, Genesco began trending downward the day after the announcement, indicating that all this good news was already priced into the stock.

Added to these stock-price doldrums was a profit warning for competitor DSW on June 18 declaring that shoe sales would go down this year. The warning brought down not only DSW's stock price but also the prices of other shoe retailers, including Genesco's, which fell below reasonable valuation and into undervalued territory. Fear has put these retail stocks on sale, and once their prices bottom out, intelligent investors will pick them up for cheap.

The world is in turmoil, but your portfolio doesn't need to be. Coach provides you with growth, Men's Wearhouse is a time-tested income stock, and Genesco is full of value. Combine all of these and you will have a well-balanced trio of retail stocks for your portfolio. Right now, investors are afraid to get into business with these retail stocks, giving you the perfect opportunity to buy them while they're cheap.

If you like retail stocks, read our special report discussing the handful of retailers actually growing revenue despite difficult times for consumers -- and the two cash kings banking on the changing face of retail. Check out "The Death of Wal-Mart: The Real Cash Kings Changing the Face of Retail."