Don't say we didn't tell you this was coming. In April, I said investors should abandon coal stocks, said they were on life support in May, and in early June when shares plunged again I said coal stocks still weren't worth buying. Well, Patriot Coal finally threw in the towel yesterday, filing for chapter 11 bankruptcy, effectively whipping out shareholders.

For coal shareholders, there hasn't been a safe place this year with Arch Coal , Alpha Natural Resources , Peabody Energy , and James River Coal all falling dramatically this year as conditions have worsened throughout the year. 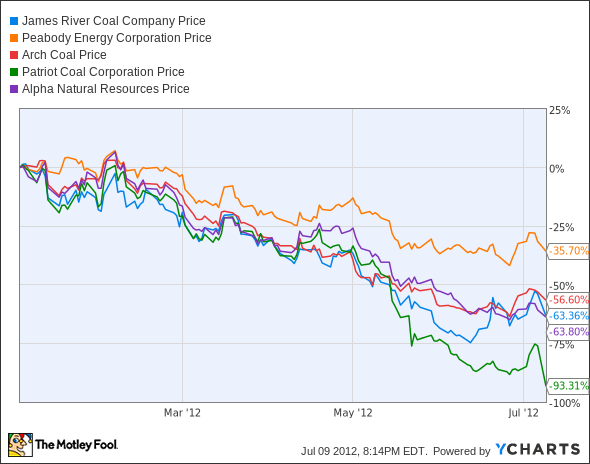 It's been a relatively fast decline in demand for an industry that could once count on continuous demand from the utility industry. In the first quarter of 2012, the amount of electricity generated from coal fell 19% from a year earlier as utilities switched from coal to natural gas. And demand isn't returning because more than 100 plants, or 13% of the fleet, has been set for shutdown. Blame it on natural gas, blame it on regulation, or blame it on terrible economies around the world -- no matter how you look at it, coal is in a tough position right now, and the future is getting dimmer.

What happened at Patriot Coal?
Patriot's demise has been coming for more than two years, when the company first began reporting losses. The falling price of coal and an uncompetitive cost structure caused losses to grow through 2011 and peaked at $75.3 million in the first quarter of the year. News that the company would shut down another mine came out in April, and the company planned to produce 4 million fewer tons in 2012 than it did in 2011, a sign of things to come.

Nearly $450 million in debt and a diminishing level of cash left the company with little choice when market conditions didn't improve, and the hope is that a new financial structure will help financial results. Whether that's the case remains to be seen.

When Patriot filed for bankruptcy yesterday, it said that it had obtained $802 million in debtor-in-possession financing to use during the reorganization, which will likely be painful. Thermal coal demand won't improve any time soon, and with the industry as a whole struggling, debt holders will be fighting for scraps.

What it means for coal stocks
You may think this is a positive sign for the likes of Arch Coal, Alpha Natural, and Peabody Energy, which could use a decline in supply, but Patriot Coal plans to continue production during bankruptcy, so supply won't decrease in the industry overall. It may actually have a negative effect on other industry players if Patriot is able to lower costs and emerge as a leaner company.

There is precedent here in the auto industry bankruptcies when automakers emerged from bankruptcy leaner and better able to compete in the marketplace. If Patriot Coal is indeed leaner and more efficient in the future, it could play the same role in the coal industry.

No matter how you slice it, there aren't a lot of positive signs for coal producers right now following Patriot Coal's bankruptcy.

Who will be next?
Patriot Coal isn't alone in this fight; the rest of the industry is struggling as well, which may lead to more bankruptcies. Arch Coal, Alpha Natural, and James River Coal are all expected to report massive losses this year, and debt will make the conditions worse for stockholders.

Peabody is the only company that looks relatively healthy, primarily because of metallurgical coal production in Australia.

I won't want to own any of these stocks right now, and James River even looks like a company I would bet against given the company's anemic margins and continuing losses. I'm afraid the future doesn't look good for coal.

There are energy stocks that are displaying positive trends right now outside of coal. Our analysts have spotted one that they think should be your top energy pick, and you can find out why in our free report found here.