Will your favorite stock have its victory lap as we hit the home stretch, or will it get lapped? First-half performances can hold some clues, so let's look to the recent past to find out whether Marvell Technology deserves a place in your portfolio going forward.

First-half recap
Marvell's stock hasn't had a good year so far, as you can see here: 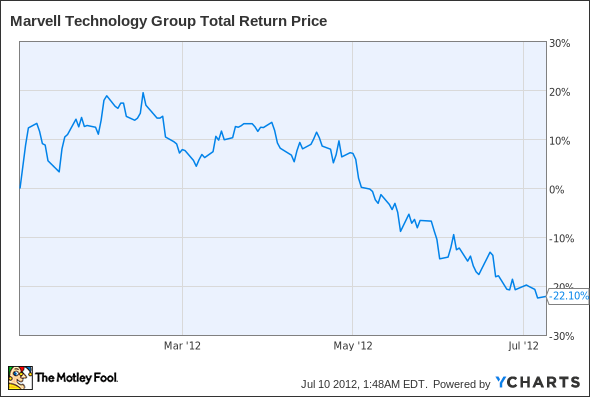 What the numbers don't tell you
Marvell's performance for much of 2012 closely mirrored the progress of the major indexes, until breaking down in May. Most of Marvell's news was of the slow-and-steady variety. The company started off the year by buying one of the two networking-chip competitors to its EZchip partnership. The deal leaves Marvell and EZchip stacked against Broadcom , which ought to boost both the ceiling and the stability of Marvell's earnings in that segment going forward.

The hard drive shutdown really hit Marvell in its first-quarter earnings, and it's been all downhill since. Currently scraping along a 52-week low, Marvell's lack of big, exciting news and reliance on hurting industries has held its stock back for some time.

Still, there are signs of hope on Marvell's horizon. The company is partnered with LED specialist Cree to produce a dimmable LED bulb, which might be lucrative once the cost of the bulbs comes down. Marvell's also bucked the trend of bad buybacks, making optimal use of its extra cash to reduce its float while shares trade near multiyear lows. Some analysts don't buy the bull case -- Stifel Nicolaus recently lowered its price target to $16, which remains substantially higher than today's price at any rate.

Marvell's networking ambitions might make it a peripheral winner on the mobile battleground. Other stocks could claim total victory. The Motley Fool's most popular free report offers the inside scoop on one company at the heart of this trillion-dollar revolution. Get the information you need -- claim your free copy now.