Though PriceSmart's earnings have fallen, investors are excited.

Every year, The Motley Fool comes out with a special free report on our top stock for the year. For 2012, that top stock is Latin American warehouse club PriceSmart . The easiest way to explain the company is to think of it as the Costco of Central and South America. PriceSmart, in fact, was spun off from Costco in the 1990s to focus on international expansion using the Costco model.

So far this year, PriceSmart's returns haven't been stellar. In fact, as of the market open today, the company's stock was underperforming the S&P 500 by 14.5 percentage points. To be fair, though, the stock is outperforming the market over the past 12 months -- it's just when we use Jan. 1 as the starting point that we see the disappointing results. 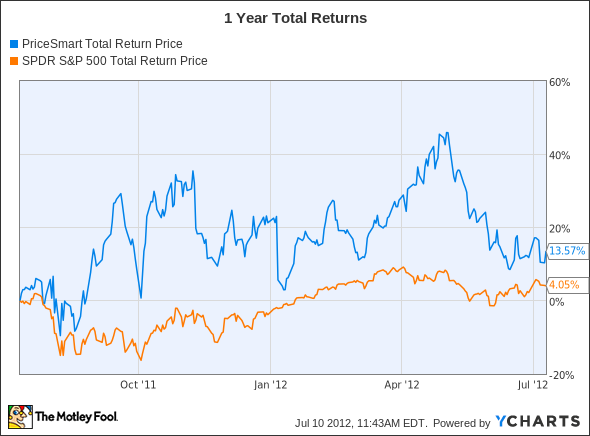 But there are still six months to go in 2012, and as any Foolish investor knows, we keep our eyes on the long-term horizon when making stock selections. The company's quarterly earnings report, released just yesterday, shows why this stock deserves a place on any international investor's watchlist.

A long-term strategy
Starting about one year ago, PriceSmart began an aggressive campaign to lower prices on its everyday products to drive more customers to its stores. Some of this is simply taking a page from Costco's playbook, but some may also be because Wal-Mart , though it doesn't have a membership-model warehouse in Latin America yet, continues to creep ever closer to PriceSmart's territory.

The decision to slash prices is a great decision for the long-term health of the company, but it can create some short-term pain, as PriceSmart makes fewer cents off of each individual product it sells. Over time, market dominance and increased volume should make up for the difference, but that's a waiting game many investors want to avoid.

A look at yesterday's earnings release, though, shows that the strategy is working. It also helps explain why shares are up nicely today.

Probably the most important number there is the same-store sales increase. It provides solid evidence that the company is growing organically by slashing prices to bring more people into their stores to buy more goods. Equally important, the company segment that continues to perform the strongest is groceries, which provides a much more stable recurring revenue stream than things like electronic merchandise.

It's also worth noting that the company announced a slight yearly membership fee increase, from $30 to $35 annually. It will be worth keeping an eye on renewal rates -- which currently sit at 89% -- to see whether this increase has any effect on the company's business model.

A great play on South America
If you look at those membership numbers, which currently reside below 1 million, you might get an idea for the kind of growth opportunity available to PriceSmart. The company made its first foray into South America last year, with the opening of a store in Baranquilla, Colombia. Things have gone so well there that the company plans to open two stores in Cali, Colombia, in 2013.

Though many investors are excited about Brazil, I think the company will probably stay out of the country, as Wal-Mart is a dominant force there. But that still leaves a vast opportunity for the rest of South America. That's why I recently tabbed PriceSmart, as well as Arcos Dorados and MercadoLibre -- the McDonald's and eBay of South America, respectively -- as great plays for international buyers. All three companies are taking proven business models and applying them to the underappreciated emerging markets down south.

I like all three of these companies so much that I've made bullish CAPScalls for them on my All-Star profile. But if you'd like three stateside companies that have breathtaking opportunities abroad, check out our special free report 3 American Companies Set to Dominate the World. Inside, you'll get the names, tickers, and scoop on all three brands which you are probably quite familiar with. Get your copy of the report today, absolutely free.