Shares of Finisar hit a 52-week low on Friday. Let's take a look at how it got there and see if cloudy skies are still in the forecast.

How it got here
Telecom equipment providers haven't exactly hit a rough patch in the past year -- it's been more like quicksand. Just when you think they're done sinking, spending gets reduced or delayed even further. That, in a nutshell, sums up the story behind Finisar and the fiber optic sector.

In Finisar's fourth-quarter report in June, we learned that the spending outlook moving forward hasn't improved much. Spending from U.S. telecom heavyweights Verizon and AT&T was expected to increase after a sluggish fourth quarter in 2011, but has been equally pitiful through the first half of 2012. However, it should be noted that despite Finisar lowering its third-quarter EPS forecast in June below Wall Street's expectations, its CEO, Eitan Gertel, anticipates significant growth in the second half of the year. If you recall, this is exactly what Gary Smith, CEO of optical networking equipment maker Ciena , also had to say after his company crushed Wall Street's expectations at the end of May.

For plenty of Finisar's peers the second half of 2012 (aka a capital expenditure increase from large telecom companies) can't come quickly enough. Oplink Communications , JDS Uniphase , and Tellabs have all seen earnings estimates heading lower over the past three months.

On the bright side, the rollout of 4G networks is bound to create a data demand surge among small and mid-tier telecom companies and the eventual expansion of Verizon and AT&T's budgets should leave plenty of profits to go around for this mostly well-capitalized grouping.

How it stacks up
Let's see how Finisar stacks up next to its peers. 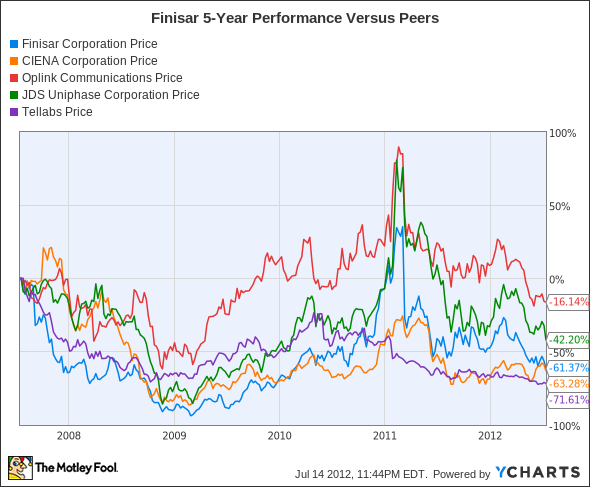 Smartphone and tablet sales may be booming and the demand for faster download speeds is persistent, but it clearly hasn't translated into bottom-line results for fiber optic equipment providers.

For the most part, these results are pretty consistent. Outside of Tellabs, which has been losing money, and Ciena, which is the only company to have more debt than cash, this is a healthfully profitable and well-capitalized group of fiber optic companies.

Oplink -- a "small cap to rule them all" pick of mine -- has the healthiest cash position with nearly $9 per share in cash, no debt, and currently trading below book value. JDS Uniphase appears to be inexpensive as well, although its earnings history is filled with many unmet expectations, so forgive me if I'm a bit skeptical of its valuation. Tellabs has been wooing shareholders with its introduction of quarterly dividends and its healthy cash balance, but it'll need Europe to turn around to really be considered a good buy among this group. Overall, Finisar's valuation seems reasonable relative to its peers.

What's next
Now for the $64,000 question: What's next for Finisar? The answer really boils down to when telecom companies start spending again. Small and mid-tier telecoms are really the only thing propping up these fiber optic companies, so when larger orders begin rolling in and Europe stabilizes, there's a ton of upside for networking equipment manufacturers.

Our very own CAPS community gives the company a three-star rating (out of five), with an overwhelming 91.7% of members expecting it to outperform. Although I've yet to personally make a CAPScall on Finisar, I am ready to enter a CAPS limit order of outperform for Finisar at $10.

"Why not just buy now?" you ask. My primary reasons for waiting are weakness in European spending and no indication from Verizon or AT&T that they plan to spend more in the second half of 2012. Finisar is fundamentally cheap relative to its peers and it's well-capitalized, but if its earnings results continue to falter it could get even cheaper. Over the long term, I feel the continuing build-out of 4G networks will be a growth driver for Finisar, but I'd feel more comfortable owning this closer to $10 than where it's trading at this moment.

Although Finisar could be a major benefactor of the coming boom in mobile data, our analysts have another company singled out as a big winner of this trillion-dollar revolution. Find out the identity of this game-changer for free by clicking here to get your copy of this latest special report.

Craving more input on Finisar? Start by adding it to your free and personalized watchlist. It's a free service from The Motley Fool to keep you up to date on the stocks you care about most.