Shares of Green Mountain Coffee Roasters hit a 52-week low today. Let's take a look at how the company got there to find out whether cloudy skies are still ahead.

How it got here
You can't swing a dead cat on Wall Street without hitting a Green Mountain bear these days. The coffee purveyor's been battered and bruised all year long by short-selling negativity and analyst downgrades. 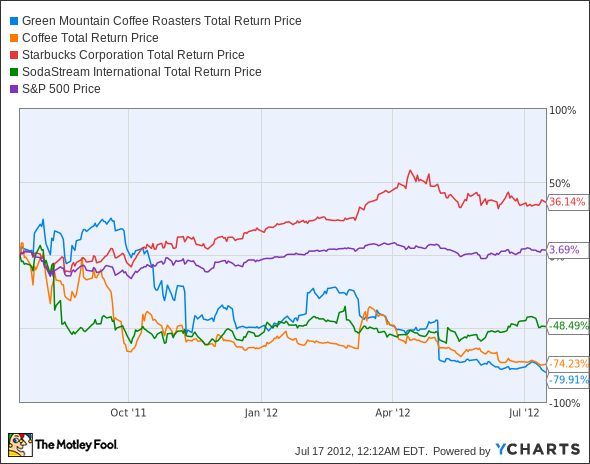 Green Mountain's most recent 52-week low can be laid largely at the feet of Stifel Nicoulas analyst Mark Astrachan. He's one of the two biggest Green Mountain bears, and apparently the most persistent. David Einhorn got the party started last October, pushing the patent-expiry and valuation-validity concerns that have now become commonplace in shorts' arguments.

Astrachan has been taking batting practice on Green Mountain since December, but two of the biggest one-day Green Mountain drops were the result of nothing more than really bad earnings. Witness May's 40% haircut after management's dramatic lowballing of both current and future numbers, which bookended one great quarter after Einhorn's canny prediction of the company's fourth-quarter floundering had already shaved nearly that much off the stock to begin with.

Were these devastating sell-offs warranted? Let's look at where Green Mountain ranks among its peers and competitors on a few key metrics.

What you need to know
Despite its negative free cash flow, it's somewhat difficult to call Green Mountain overpriced compared with any of the other companies mentioned earlier. It's the only one with a single-digit price-to-earnings ratio, which is a somewhat shocking situation for this former highflier to find itself in.

Source: Morningstar. NM = not material because of negative results.
*2009 to trailing-12-month period.

Much of Green Mountain's negative free cash flow in the past two years has been acquisition-based, as the company's pushed into brick-and-mortar coffee shops and added complementary coffee-brewing machine maker Van Houtte to its lineup since 2009. If the company can grow organically without splashy buyouts, there's no reason it can't resume positive free cash flow. That's a big if, though.

Coffee Holding's latest earnings were a big miss, coming in not only under expectations but also arriving underwater. Its reliance on Green Mountain could make this a warning sign for bad times ahead. Green Mountain's management hasn't been very helpful, either, in contrast with SodaStream's continued optimism despite a similar drubbing.

What's next?
Where does Green Mountain go from here? That will depend on a few factors, three of which my fellow Fool Sean Williams outlined a few weeks ago. If the company can't manage its inventory smartly, and if its partnerships with Starbucks and Dunkin' Brands don't provide a consistent boost, there may not be as much upside as there appears from these doldrums. There's at least one Green Mountain bull left at Barron's, but that seems about as important to the market as sand is to an Egyptian.

The Motley Fool's CAPS community has given Green Mountain a two-star rating, with 71% expecting the stock to stage a comeback. Long-term Green Mountain bulls have still scored substantial gains, but many have held their outperform call for more than five years. Let's see whether the next five years turn out as well for those jumping in today.

Interested in tracking this stock as it continues on its path? Add Green Mountain to your Watchlist now for all the news we Fools can find, delivered to your inbox as it happens. If you're on the hunt for another stock the market might have underestimated, The Motley Fool's Top Stock for 2012 ought to fit the bill. Find out why this stock could shock the Street over the second half of the year and bring you big gains -- all the info's right here in our exclusive free report.