Shorting stocks can be a key strategy in any investor's portfolio, but it can be a challenge finding the right stocks to short. Growth stocks often have the furthest to fall, but they can be risky. Value stocks provide little in the way of upside, and by the time you know a company is in trouble, the big investors have eaten up the short positions and there aren't enough shares to borrow and sell short.

Still, it can be done. Below I have laid out four stocks that are great short picks right now, two of which I've even added to my portfolio.

Barnes & Noble
The bookstore is a thing of the past, and Barnes & Noble's stores are a dying business. As online competitors like Amazon.com grew, Barnes & Noble attempted to make the shift to a new model. The Nook was a nice effort, and the company has seen sales of digital products grow 119% in fiscal 2012, but the company's financials have taken a dive. 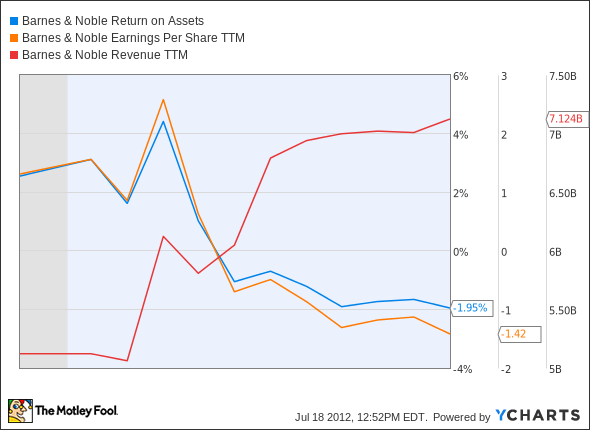 The company did get a bit of a boost when it announced a venture with Microsoft to create a subsidiary for Barnes & Noble's e-book and college textbook businesses. The problem is that Microsoft has done nearly everything wrong in both tablets and smartphones, giving me little confidence it can get this partnership right.

A company that is continually losing money in a dying business isn't one I want to own and looks more like a short pick to me. There may be a ray of sunshine for the Nook, but I think competition with more experience building tablet devices will fare much better, and eventually, the Nook will be a thing of the past.

Amazon.com
Amazon may be one of the main reasons Barnes & Noble is in trouble, but that doesn't mean it's a great bet for investors, for a very different reason: The share price is insane right now. In April, I calculated that the company would have to grow margins and increase revenue at 38.1% per year over the next five years to live up to its current valuation. Since the company is chasing a number of low-margin businesses, I don't know how that's going to happen.

The company is also facing fierce competition in its main businesses, which puts it in a tough position trying to play catch-up. It has a lead in online retail, but everybody and their brother wants in on that business so margins will remain low. In streaming video, Netflix has the lead over Amazon's unimpressive library and has better distribution methods. Finally, in tablets, Apple is far and away the leader, and Amazon doesn't have nearly the expertise to catch it or Samsung in the tablet market.

Nokia
Nokia was until recently the world's biggest phone maker. Today, it's making phones no one wants to buy.

The Lumia 900 was supposed to be the first step back to relevance, but AT&T recently cut the phone's price in half on the back of weak sales. An analyst for Asymco estimated that the company has sold 330,000 of the devices in the U.S., which compares to 4.3 million iPhones sold by AT&T alone in the first quarter.

To make matters worse, Nokia partner Microsoft is releasing a new operating system that won't be compatible with the current operating system, leaving current customers out to dry.

The history of phone makers who lose the top spot in the market isn't pretty. Motorola was once as flashy as Apple in the phone market, Research In Motion's product was so popular people called it CrackBerry, and now Nokia is next in line fading into oblivion.

Sony
Speaking of formerly relevant companies, how about Sony ? The company that once was an iconic brand that made music portable with the Walkman is now a shell of its old self. Today, the company's products are barely relevant when compared with companies like Apple and Samsung. Sony is trying to stay relevant by competing in commodity markets like televisions, computers, and cameras instead of being on the cutting edge like it once was.

The fall in relevance of Sony's products has been followed by a sharp dropoff in financial performance. The chart below shows the company's rocky revenue stream but also a steep decline in profit over the past year while the company posted massive losses. 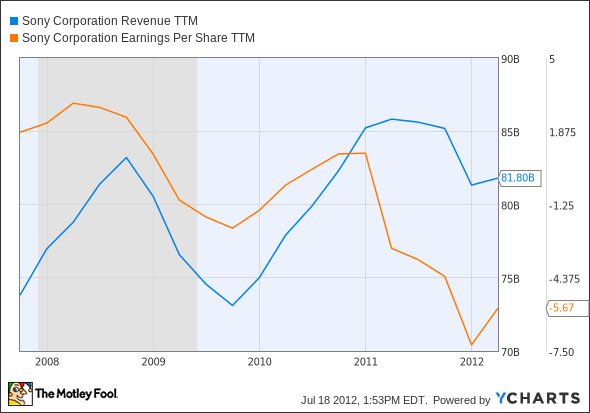 Like Nokia, it's hard to come back from a point where your brand has fallen off the map and I don't think Sony can recover. I see no innovation and just don't see the company being able to return to the cutting edge.

Foolish bottom line
These stocks each have their own problems that I think make them great candidates for short positions. I've recently added short positions in Sony and Amazon.com to my portfolio and I'm making underperform calls on each of these four stocks in My CAPS portfolio to back up these calls.

If you're not into shorting stocks and are more interested in a long pick, check out our report highlighting The Motley Fool's top stock pick of 2012. The report is free when you click here.

Learn more about Apple in the Fool's latest premium report on the world's biggest and richest company. Fool analyst Eric Bleeker takes an in-depth look at Apple, and the report comes with a year's worth of free research updates to take the story well into the future.

Fool contributor Travis Hoium is short shares of Sony and Amazon.com and manages an account that owns shares of Microsoft and Apple. You can follow Travis on Twitter at @FlushDrawFool, check out his personal stock holdings or follow his CAPS picks at TMFFlushDraw.