If you've been keeping score, it's clear that the past decade has been one for small-cap stocks' win column. And guess what? They just keep on winning.

The scorching outperformance of small caps became particularly noticeable starting in 2003, but we can go back as far as the start of 2000 to see the beginnings of the group's run. 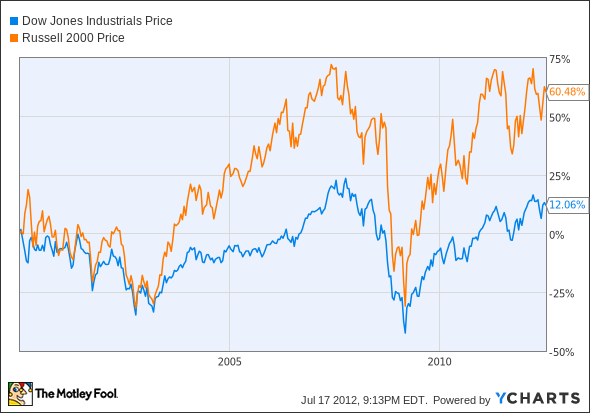 While the Russell 2000 took a particularly pronounced dive during the crash of 2008-2009, it has seriously walloped the Dow Jones over this period. Ditto for this year so far, as the Russell small-cap index has more than doubled the returns of the Dow. 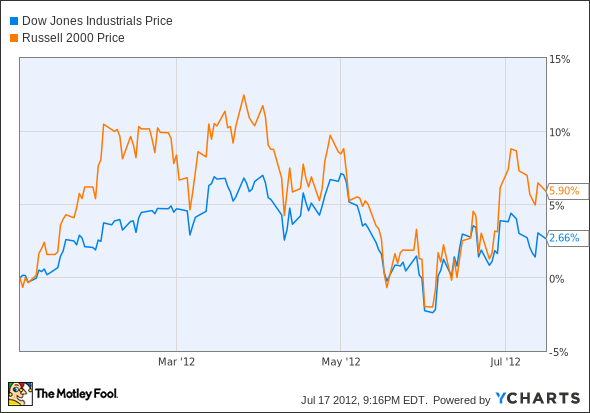 What's going on here? And, more importantly, is this a trend you need to jump on?

To everything, there is a season
Investors have a tendency to get excited about particular areas of the market. Sometimes it might be a craze over companies with ".com" in their name. At other times it might be a fascination with financial innovation. Growth might be on the tip of everyone's tongue, or investors might be willing to sacrifice growth for a solid dividend.

And, of course, sometimes the market seems to pay attention to nothing but huge, blue chip stocks, only to later forget about those blue chips in favor of small, up-and-coming companies.

As much as it might seem strange right now to think of the huge, lumbering stocks in the Dow vastly outperforming the small stocks that have so much growth potential, we don't have to go back too far to find it. Go back to 1989 and it was practically 11 uninterrupted years of exactly that -- the Dow spanking the Russell 2000. 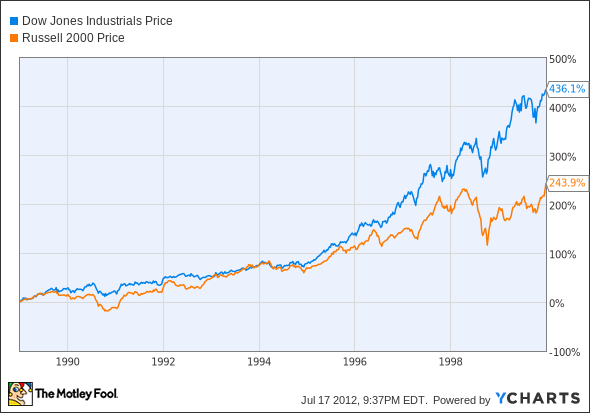 Of investor love and valuations
Investors' love affairs with certain segments of the market have a very predictable result. Namely, valuations in the favored group get puffed up, while valuations among other, more ignored areas of the market languish.

Back in 2000, the median EBITDA multiple (a better valuation measure than P/E) for stocks in the Russell 3000 with a market cap ranging from $500 million to $1 billion was around 8.4. Today, that ratio is essentially unchanged. While that may not sound like much, think about it for a second. In 2000 we were at the peak of the huge dot-com bubble. Today, stocks are still struggling to find their footing after the massive global financial meltdown. That small caps are essentially getting the same valuation multiples today is very significant.

Meanwhile, the median EBITDA multiple for megacap stocks with market caps above $50 billion was 20.2 back in 2000. Today? Just 8.1. No wonder they've been beaten soundly by small caps.

If we look at some individual stocks, the change in valuations is even more notable.

There are certainly counterexamples, but what we've seen over the past decade-plus are smaller companies getting more expensive valuation-wise, while larger companies have gotten cheaper. In some cases, this has meant wild overvaluations adjusting to more reasonable levels -- as in the case of EMC. For other stocks though -- I'd argue for Intel -- overvaluations have turned into downright bargains.

Today, tomorrow, and the next decade
While it may be too soon to call the end of the reign of small caps, it's a very different picture today than it was 12 years ago. Small caps may still have growth advantages, but they're no longer much cheaper than their larger brethren. And as far as large caps go, the extent to which valuations have fallen is drastic. Looking at Dow stocks today, there are quite a few whose valuations have gone from terrible to tantalizing. Besides Dow component Intel above:

While it'd be a mistake to presume that we're in line for a run-up similar to what we saw in 2000, there's a lot of potential quarry right now for bargain hunters among large, blue chip stocks. Even better, most of these stocks pay handsome dividends. Digging in even further, my fellow Fools have picked out three prime buy candidates among the dividend-paying Dow stocks. To get the lowdown on these three opportunities, download a free copy of our latest report: "The 3 Dow Stocks Investors Need."