Russia's vodka market-share leader Central European Distribution sells its clear elixir to some of the thirstiest humans on the planet. Even though Russia represents the world's largest vodka market, this fact hasn't been enough of a tonic for this company. But with Central European taking steps to tidy up its opaque financials, is it too little too late?

Let's examine where Central European Distribution has been this year, and where it may be headed.

Where it's been
Central European, with a market cap of $230 million, has little cash on the balance sheet and over $1 billion in debt. Net sales were up 27% in the past two years, but gross margins decreased nearly 24% during this time. Last year a $1 billion non-cash impairment charge left net income at negative $1.3 billion.

Enterprise value-to-earnings before interest, taxes, depreciation, and amortization (EV/EBITDA) is a valuation metric that takes debt into account -- the lower the number, the better. Central European appears the most overvalued versus its competitors.

Let's see how this has affected stock performance so far this year. 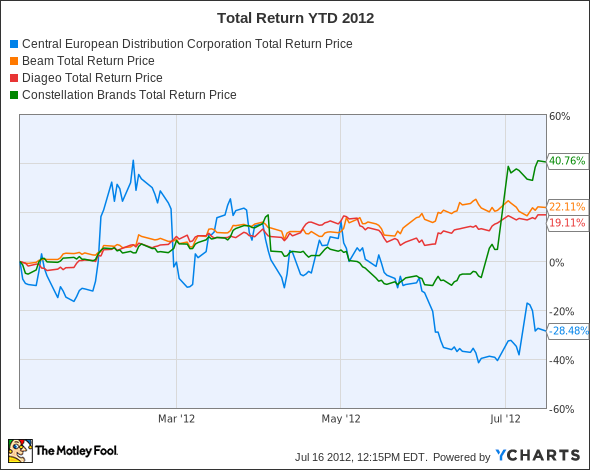 Central European Distribution stock has lost roughly 28% so far this year. Meanwhile, Constellation, Beam, and Diageo have each enjoyed approximately 40%, 22%, and 19% total returns, respectively, during this same period.

The New Jersey-based company incorrectly estimated the extent of trade rebates and overstated sales figures during the past two years. As a result, Central European is in the process of restating financials. It recently announced it'd reduce revenues and EBITDA $49 million each for the time period from Jan. 1, 2010, to Dec. 31, 2011. Meanwhile, lawsuits have materialized claiming executives of the vodka producer and importer misled shareholders by overstating these sales figures.

What to expect
Despite the dire state of its balance sheet, Central European Distribution is a big player in a huge market. Russia represents the world's largest vodka market, and vodka represents greater than 90% of the rapidly consolidating Russian spirits market. The top five producers, including Central European, currently enjoy 55% market share -- double the amount they held in 2006. Expect further consolidation in the Russian vodka market.

Aside from producing and importing spirits, Central European imports beer including brands Budweiser and Corona. The makers of Bud and Corona, Anheuser-Busch InBev and Grupo Modelo, recently announced a deal that will result in greater geographic reach for both businesses' brand portfolios. The deal may allow Central European to import more beer offerings to Poland, Russia, and Hungary. However, don't expect this deal to make a dent in revenues -- only 1.3% of Central European's total net sales in 2011 were derived from beer.

Central European has openly acknowledged its inability to meet near-term debt obligations. In its 2011 SEC 10-K filing, management claimed that net losses and the $1 billion impairment charges "raise substantial doubt about the company's ability to continue as a going concern." Recognizing it needs a lifeline, Central European has developed strategic alliances with investors, namely Russian Standard, which has swooped in to alleviate debt burdens and take greater ownership stake.

Russian Standard already owns 28% of Central European and will soon own more. Recently, Russian Standard announced it'd buy up to nearly 43% of the company. Shares climbed 33% after the announcement. And in response to investor pressure, Central European also announced that its longtime CEO resigned. The company named its largest shareholder and owner of Russian Standard, Roustam Tariko, as chairman. Expect an even greater ownership stake from this strategic partner and a possible future buyout.

Foolish bottom line
If you like the prospect of selling Russians alcohol, consider Diageo instead. The company enjoyed a 21% increase in organic net sales in Russia attributed to its Smirnoff, Ketel One, and Ciroc vodka brands, scotch, and rum. Diageo boasts a solid balance sheet, healthy margins, dominant global reach, and a diversified brand portfolio.

If you'd like to guzzle stocks with expanding global presence, check out the one stock our analysts are so excited about they've dubbed it "The Motley Fool's Top Stock for 2012." This company boasts vast emerging-market exposure and lots of growth potential. This report won't be available forever, so get your free copy today.