Will your favorite stock have its victory lap as we hit the home stretch, or will it get passed by? First-half performances can hold some clues, so let's look to the recent past to find out whether Sirius XM deserves a place in your portfolio going forward.

First-half recap
Sirius XM has managed to eke out a slight gain in 2012, riding a bounce into July after whipsawing wildly through much of the spring: 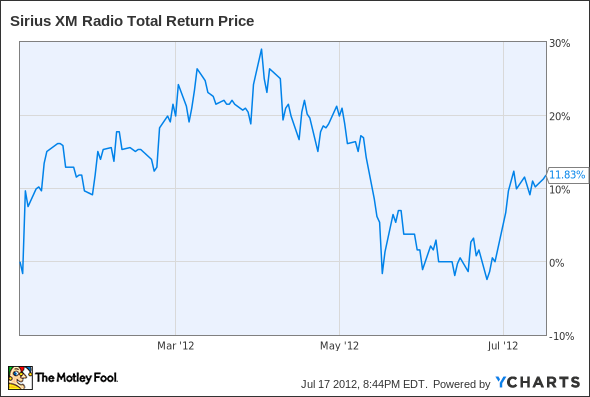 Here are a few financial snapshots of its recent performance.

What the numbers don't tell you
Sirius steamed into the year with a big subscriber boost, notching 1.7 million more subscribers at year-end than it claimed at the start of 2011. The company got some bad news from marquee performer Howard Stern soon after. The controversial shock jock -- who might be going deaf -- claimed he would almost certainly leave the industry after his contract expires in 2015. Sirius also brought Ziggy Marley on board this winter, but that's unlikely to be an effective counterweight to Stern's departure. Sirius also got a measure of relief this year when Stern's long-running lawsuit was finally tossed out of court in April.

The company's first earnings report in 2012 was a mixed bag, but that didn't stop shares from climbing to April highs. Subscriber growth guidance was set at 1.3 million new accounts by year-end, which would total 23.2 million if all goes according to plan. Its first-quarter earnings report boosted that guidance to 1.5 million, as 405,000 new subscribers had already joined by the first three months of 2012. The latest numbers, as of the second quarter, were just over a million new subscribers so far this year. Still, Sirius was only willing to boost its year-end guidance to 1.6 million, which seems like a real lowball estimate now.

Sirius hasn't been without its threats and challenges. Near-majority stakeholder Liberty Media will soon own 46.2% of the satellite-radio superstar, and Liberty leader John Malone has been pushing hard to increase his level of control over the company. Warren Buffett's Berkshire Hathaway gave Liberty a silent seal of approval this year by acquiring a 1.7 million share position in the holding company.

In-car entertainment alternatives are also finally starting to compete. Pandora Media's moves in the streaming-music sphere are well-known, to say nothing of its large listener base. Verizon also decided to dip its toe into in-car entertainment when it bought connected-car technology leader Hughes Telematics. And startups such as Songza could also be a threat to Sirius (and Pandora) down the road.

Sirius has made great strides since the dark days of 2009. Since becoming profitable again, it's not only managed substantial net income growth, but it has also seen its P/E shrink to a rather humdrum 26.1: 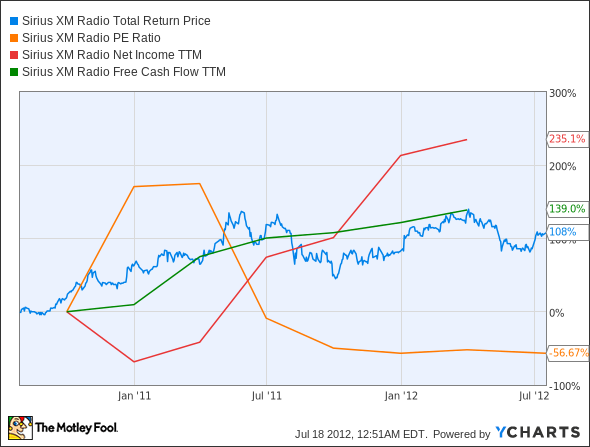 At this level, Sirius may well have more upside than downside, particularly if its strong subscriber growth keeps forcing the company to issue higher guidance every quarter. Longtime Fool Rick Munarriz offered three strong reasons to buy Sirius earlier this month, and they're well worth considering if you're looking to start a position or add to your stake. However, Sirius maintains the high levels of debt it took on to stave off bankruptcy, which could be very dangerous if credit markets freeze up again, or if interest rates start rising before Sirius has its repayment plan down pat.

Warren Buffett has staked his claim in Liberty Media, but it's not the only company he has his eye on. There are a number of beaten-down stocks on his radar that could yield Sirius-like growth when the market recognizes their potential. Don't miss out on "The Stocks Only the Smartest Investors Are Buying," an exclusive Foolish free report that has several great (and overlooked) stocks you can buy right now. Find out more before the market catches on.