Shares of Advanced Micro Devices hit a 52-week low on Friday. Let's take a look at how it got there and see if cloudy skies are still in the forecast.

How it got here
Almost a year ago, I authored an article describing 10 reasons that I'd say "no" to AMD. Needless to say, my contrarian views didn't exactly go over well with readers, but it did indeed give me bragging rights thanks to AMD once again imploding during earnings season.

To say that AMD's second quarter was challenging might be the understatement of the week. For the quarter, AMD's revenue fell 10% over the year-ago period. Its computing solutions segment, which is responsible for three-quarters of sales, took a big hit. AMD suffered through weak demand from China and Europe, an inventory imbalance in its new long battery life Llano chips, lower unit sales and average selling prices of its server business, and rapid growth in tablet sales, which is crushing the outdated notebook market... and this all happened the second quarter. AMD's graphics segment saw sales remain flat year-over-year despite slower PC and console sales and pricing pressures.

Suffice it to say that AMD continues to lose ground to rival Intel , which reported a 3% rise in PC revenue under the same conditions that AMD recorded a 13% decline in sales. New products, including its Llano and Brazos APU, have the potential to take market share from Intel. However, AMD's recent shift away from Globalfoundries to Taiwan Semiconductor could cause even further inventory issues and delays.

How it stacks up
Let's see how AMD compares to its peers. 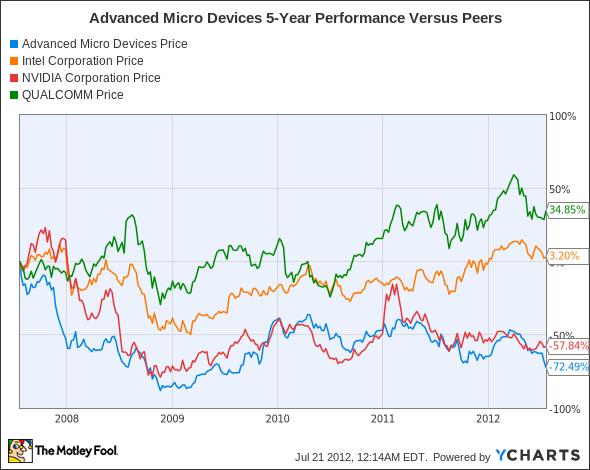 You'll notice that despite the cheapest valuation of this group, AMD also has the slowest projected growth rate. Years of underperformance have left investors with a bad taste in their mouths.

Intel continues to maintain the lion's share of the microprocessor market and has possibly the most attractive valuation among these four. Taking into account its push into smartphones and tablets in which it'll be going head-to-head with ARM Holdings, Intel still has all of the makings of a high-growth tech company.

Apple and Microsoft hold the key to NVIDIA's and Qualcomm's future success. Microsoft's Windows 8 software will be running on NVIDIA, Qualcomm, Texas Instruments, Intel, and AMD processors. Separately, NVIDIA has worked its processor into one of Microsoft's new tablets and has had its GPU chosen by Apple to be in its new MacBook laptops.

What's next
Now for the $64,000 question: What's next for AMD? The answer is going to depend on whether or not it can actually be consistent with meeting expectations, if it can use its new products to grab market share from Intel, and if it can maintain profitability by continuing to trim costs.

Our very own CAPS community gives the company a two-star rating (out of five), with 82.7% of members who've rated it expecting it to outperform. As you can imagine, I can be counted among the minority with a CAPScall of underperform that is currently up 34 points.

I'm just really not certain that AMD's pain is anywhere near over. Supply-side issues, weak PC demand, a move away from notebooks and into tablets, and Intel's dominant market share are all reasons to be pessimistic about AMD's future. Until I see concrete evidence from AMD that it's consistently growing, I plan to keep my underperform rating open.

Although AMD's innovation could make it a major benefactor of the coming boom in mobile data, our analysts have another company singled out as a big winner of this trillion-dollar revolution. Find out the identity of this game-changer for free by clicking here to get your copy of this latest special report. Or, better yet, get all of the up-to-date premium research on Apple from our senior technology analyst, Eric Bleeker. With free updates for an entire year, this report, which costs less than your cup of coffee for a week, will pay for itself in no time. Click here to get this premium report on Apple.

Craving more input on Advanced Micro Devices? Start by adding it to your free and personalized watchlist. It's a free service from The Motley Fool to keep you up to date on the stocks you care about most.