Nine whole months after Google and Motorola announced their love to the world, and that Big G was acquiring the unprofitable smartphone maker, the two consummated their union in May. The $12.4 billion deal carried a whopping 63% premium -- meaning Motorola was worth around $7.7 billion prior to the engagement.

In the high-flying world of technology, nine months is an eternity. Just ask Nokia or Research In Motion how quickly the tides can turn if you fall asleep at the wheel. Heck, in the past six months alone they’ve lost 57% and 64% of their respective values. 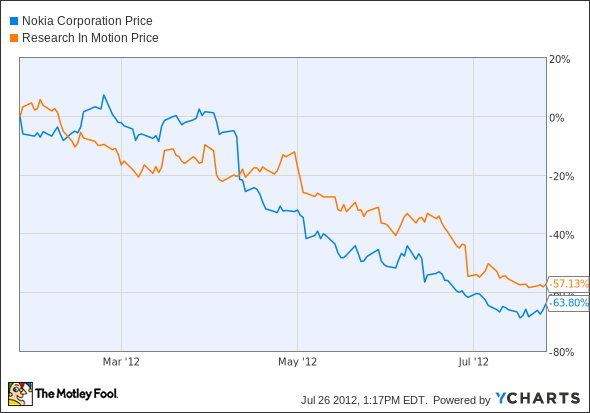 The $12.4 billion question
The real mystery is how much the value of Motorola, patents and all, could have changed over the same time, and maybe even how much Google could have saved had it just waited a few more months. It’s not as if Google needed to act quickly to prevent a rival like Apple from making a bid, because Apple would never have even considered such a large acquisition. Microsoft has a penchant for ill-timed and large acquisitions, but it was already battling Motorola in court over Android-related patents, making it unlikely that Mr. Softy would come out with a buyout offer. Why the rush?

Motorola had three earnings reports after the deal was announced, each with operating and net losses. The red ink is negligible relative to the overall size of the acquisition, but highlight that Motorola’s underlying business was decidedly not what Google was after. On each report, shares didn’t even flinch -- Motorola investors couldn’t have cared less, because it would soon be Google’s problem if all went according to plan.

That’s almost $200 million in net losses between the deal’s announcement and closing, but it also generated positive operating cash flow of about $150 million. Either way, these figures are fairly small relative to the $12.4 billion sticker price. Instead, the bigger unknown is how the value of those patents may have changed over the time, because patent valuations were rather lofty at the time, and seemed to have calmed down a bit.

Google’s move even spurred talk of a "patent bubble," and IP-centric companies like InterDigital got huge boosts on hopes that it would be the next target. 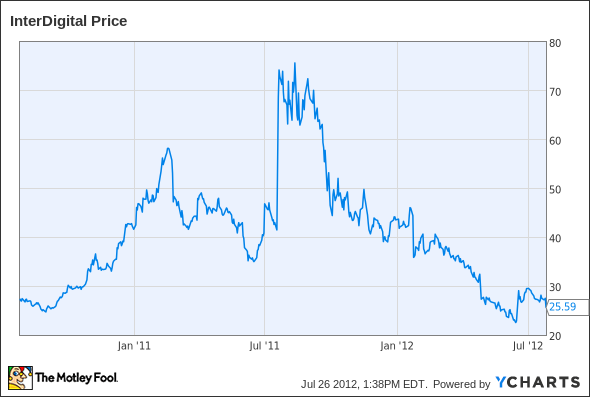 Mystery solved – sort of!
The search giant has now filed its most recent 10-Q, detailing some of the accounting behind the scenes for its expensive new toy. Google already told us that Motorola generated another $233 million in operating losses in the most recent quarter, but now provides a more detailed breakdown of the acquisition. Of the $12.4 billion total, here is how the valuations panned out.

The cash acquired effectively brings the net purchase price down to $9.5 billion. The goodwill is chalked up to expected synergies that Google expects to realize after the acquisition. Of course, the whopper there is the $5.5 billion assigned to patents and developed technology, or roughly 58% of the net purchase price.

Perhaps more interesting is that Motorola’s final 10-Q showed it was carrying its intangible assets at a book value of just $137 million, net of accumulated amortization. That included its completed technology, licensed technology, and patents. Motorola also had $1.4 billion in goodwill of its own at the time.

It’s important to note here that GAAP accounting rules prohibit the upward revaluation of any intangible assets so, as far as GAAP valuations are concerned, the book value of patents is a one-way street downward. International standards, or IFRS, differ, and allows upward revaluations to fair value, but we don’t go by IFRS 'round these parts. That’s why Motorola’s older valuations may seem so remarkably low relative to Google’s new figures.

Come back and see us, y’hear?
Motorola shareholders, including Carl Icahn, got the best end of this deal, fetching such a massive premium for the patent portfolio and bleeding business. Now that Google has taken home its new bride, it better hope the honeymoon goes well.

Googorola is sure to make integrated devices like Apple, but Apple, itself, remains the king of hardware software integration. That’s why its iPhone business alone generates more revenue than all of Googorola. The Motley Fool has just launched a premium research service all on Apple. Sign up now to read about how Apple’s long-term fundamental drivers are as strong as ever.