Shareholders were more than happy to do the iRobot yesterday. Sure, earnings were lower this year than in the same quarter last year. But analysts had expected less than half the earnings per share iRobot reported, and shares have surged as a result. The company also boosted its full-year forecast, which was much better news for investors than they received early this year, when weak guidance sparked a sell-off.

Let's take a look at the information iRobot's offered the market to find out whether this is the start of an extended turnaround or just a momentary glitch.

What the numbers tell you
iRobot's revenue was up sequentially and year over year, but net income came in a hair lower than its year-ago result. That's clearly more than the Street was expecting, and it was driven by major growth in the company's consumer segment, which offset government spending on its land-based robotic warriors and support specialists.

Let's take a look at how iRobot's latest report stacks up: First-half net income has come in well under 2011's results for the same period, although revenue hasn't changed much. It seems apparent that Roombas and their robotic ilk don't bring in the same high margins that Uncle Sam offers. The latest uptrend will need to continue very strongly through the second half to beat last year's results and reestablish iRobot's growth-stock cred. Even so, iRobot's diversity has produced more bottom line growth over the last few years than aerial robotics specialist AeroVironment and its small military drones: 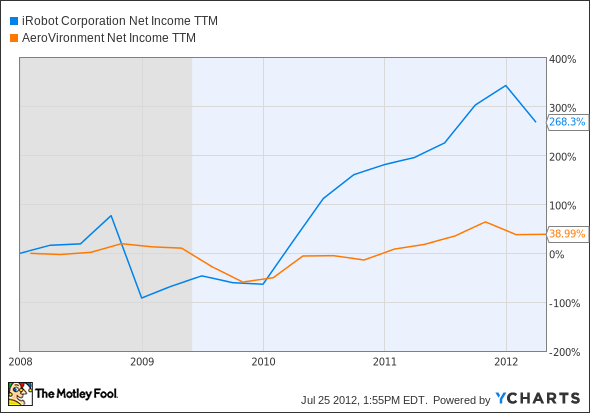 iRobot's upscale domestic focus appears to be the right approach. The company not only grew its home robot revenues 40% in the United States year over year, it also booked a third of all home robot revenue from Western Europe, which saw an identical growth rate. That kind of revenue growth in Europe is impressive, whether you're talking about Germany or Greece -- it's not as though there are any true safe harbors on that continent lately. Japan, as you might expect, loves its robots -- that country's sales drove Asia-Pacific home robot growth to an 85% gain.

Rolling forward
iRobot also unveiled a new telemedicine robot developed in partnership with start-up InTouch Health. The robot, dubbed RP-VITA, is built on iRobot's Ava platform, which somewhat resembles an iPad on an autonomous tripod. I hope that iRobot is also working on more functional bots, as there may be somewhat limited upside to a teleconferencing platform you can wheel into another room.

That's not to say iRobot has no such bots -- Progress Energy (now merged with Duke Energy ) bought some military-based bots for dangerous cleanup and maintenance work in nuclear plants. iRobot has also teamed up with Texas Instruments to make use of the latter's low-power mobile processors.

That could lead to the development of highly articulated bots, their limbs controlled by a series of decentralized processors working together, in addition to controls routed through a central hub. Your nervous system has a similar decentralized-centralized mode of operation, particularly when dealing with pain signals. I hope my next Roomba doesn't come ready to wonder, "Why was I programmed to feel pain?" when it runs over a tack.

Even after yesterday's big bounce, iRobot has a long way to go to get back to its winter highs: 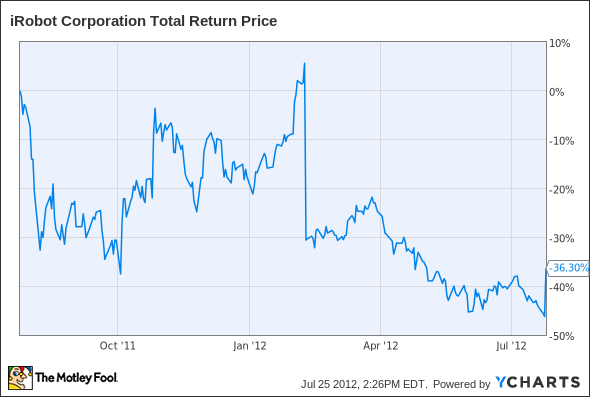 But these positive signs could be just the spark the stock needs to rally through the second half. With a P/E just under 20 and a market cap just over $600 million, iRobot's likely to have more upside than downside. The robot maker claimed its 100th American patent earlier this year. That may not seem like much, but many of these patents cover high-value developments, such as bots that can return to their commanders if communications fail, sonar navigation technologies, and other autonomous and semi-autonomous innovations.

Interested in following this company's major moves? Add iRobot to your Watchlist now for updates as often as we can find them. If you're still on the hunt for transformative technologies to invest in, take a look at The Motley Fool's most popular free report: "3 Stocks to Own for the New Industrial Revolution." These companies don't need to wait for the government's help; they can change the world on their own. Click here to find out more.