July has been a tough month for Enbridge's reputation. It is hard to read about the midstream industry without coming across at least one article per day slamming the company for its role in a U.S. oil spill two years ago. The market has not flinched, however, giving investors something to think about: Get out while the getting is good? Or embrace this company for the long haul?

Oil, oil everywhere
Earlier this month, the National Transportation Safety Board completed its review of the 2010 Enbridge pipeline spill in Michigan, and the findings are not pretty.

The NTSB report criticized both Enbridge and the Pipeline and Hazardous Materials Safety Administration for negligence and weak oversight. Apparently, weakness in the pipeline was detected as early as 2004, and no one did anything about it. When the line finally ruptured in 2010, the ensuing actions of Enbridge employees pointed to a disturbing lack of preparedness.

Critics are quick to point to the Kalamazoo incident when considering the likelihood of another Enbridge spill. And why not? As a pipeline operator, you have essentially two responsibilities to the general public: maintain the integrity of the line and respond appropriately in the event of a spill. Enbridge failed miserably on both counts, establishing a precedent that will be difficult to dismantle in the minds of Americans and Canadians alike.

When to say "when"
The growing hostility is a headache for Enbridge, but the market, for all intents and purposes, does not care about pipeline spills or the NTSB report. In fact, over the course of the past two years, Enbridge shares have handily beaten the performance of the S&P 500: 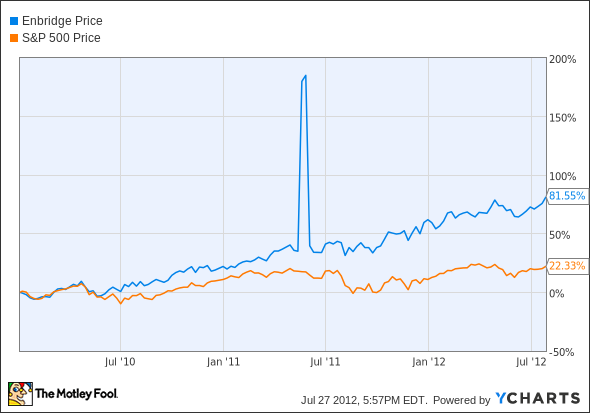 As you can see, outside of a June 2011 stock-split anomaly, shares have slowly trended up over the past two years, more or less mimicking market hiccups and resulting in an 80% return for investors.

The question now becomes: If the market isn't going to punish a company for its negligence, is selling in the face of mounting opposition to any and all Enbridge projects an overreaction? Do investors continue to hold this stock?

Let's do some math
Looking at the numbers might help. The Michigan spill cost Enbridge $765 million. The company only paid $115 million out of pocket, though, because insurance covered $650 million. The company may well face the highest fine ever issued by the Pipeline and Hazardous Materials Safety Administration, but that's still only $3.7 million -- a figure similar to what the company paid for its Northern Gateway advertising campaign. In the grand scheme of things, this costly disaster simply didn't cost very much, which may explain in part why the market has not reacted.

There is no guarantee that will always be the case, however. There is a clamor for greater government oversight, stiffer penalties, and increased accountability from pipeline operators, which may increase fines and the general cost of doing business in the future.

Already, the expense of the Northern Gateway project has grown from $5.5 billion to $6 billion as Enbridge has promised to use "extra-thick" pipe where the route crosses water.

Wait and see
The factors behind the Kalamazoo River spill should serve as a giant red flag to investors. At the same time, it is hard to dismiss a company that is single-handedly responsible for the transportation of 13% of the U.S.'s total oil imports. I encourage investors on the fence to remain there while we see what kind of ship new CEO Al Monaco will run.

In the meantime, keep an eye on how Enbridge works to implement growth across its network. The company recently reversed the Seaway Pipeline that it co-owns with Enterprise Products Partners . Reversals, and moves similar to this -- twinning lines for expansion and switching pipelines over from gas to oil, or vice versa -- can increase the efficiency of the company's network and won't be subject to the sort of opposition that a brand-new line will face.

Foolish takeaway
Enbridge isn't the only pipeline company facing opposition, and as we take a close look at this company, we should consider the industry at large. Plains All American is cleaning up a recent spill in Alberta, and we are all well-aware of TransCanada's Keystone XL tribulations. North America needs more midstream infrastructure, but companies pinning their hopes on massive oil pipeline projects may not be the best investments right now. Fortunately, there are other options in the midstream sector -- and plenty of other high-yielding stocks in general -- for investors wary of oil pipelines.

Have thoughts about investing in Enbridge or any other pipeline operator? Share them with your fellow Fools in the comments section below.