Door-to-door beauty retailer Avon Products continues its unsightly downward trajectory. The stock has suffered a dismal 2012, and its latest quarterly report was downright grim. Not even a low-cost business model, a battalion of global sales reps, and vast emerging market exposure have been enough to keep Avon's stock afloat.

What's going on?
"Avon's second-quarter financial results are not good," CEO Sheri McCoy said in a news release on Wednesday. You can say that again.

Avon reported that its total sales were down nearly 10% with much of the decline cited from a strengthening dollar. Revenues deteriorated in every single one of Avon's four geographic segments versus the same quarter last year. Net income plummeted an embarrassing 70%. Avon's selling, general, and administrative expenses continue to outpace total revenue, and the company's operating margin declined an abysmal 55% in the past 12 months. Rising product costs and increases in outdated inventory damaged margins.

And the company's sales reps are exiting in droves. Avon lost 3% of its sales force during the most recent quarter attributed mostly to loss of reps in the U.S. Latin America was the only glimmer of hope for the company as this region was the solitary one that experienced sales rep growth.

Where Avon's been
Fragrance maker Coty made a generous offer to buyout Avon in May. But not even the financial backing of Warren Buffett's Berkshire Hathaway and brand promotion of beauties Beyonce and JLo was adequate for Avon's management to nibble. Instead, Avon felt its best hope of a turnaround rested in CEO Sheri McCoy, a former Johnson & Johnson executive who's been at the helm since April. As a result, Avon is currently embroiled in lawsuits claiming the company wasn't acting in shareholders' best interests by rejecting the Coty deal. Since Coty withdrew its offer, Avon stock has dropped nearly 27%.

Speaking of legal troubles, Avon is ensnared in a costly, long-running investigation as to whether it paid overseas bribes, which is a violation of the U.S. Foreign Corrupt Practices Act. Avon has spent roughly $250 million since 2008 on an internal probe that initially focused on whether it paid bribes in China. The probe has since spread to other countries. Avon announced on Wednesday that it was in discussions with the SEC and the Justice Department to try to reach a settlement.

Competition
Declining sales, shrinking margins, a large debt load, and a hefty dividend payout ratio have put pressure on Avon's stock performance. Avon pays a 6% dividend yield, which it should strongly consider reducing. At its current dividend payout ratio of 101%,  the company pays its shareholders dividends that are greater than the company's earnings. Competitors Herbalife and Nu Skin Enterprises (NYSE NUS) don't pay huge dividends, but their modest ratios are not only sustainable but also offer the companies room to grow their dividends in the future.

And we can see how this has affected the stock performance year to date. 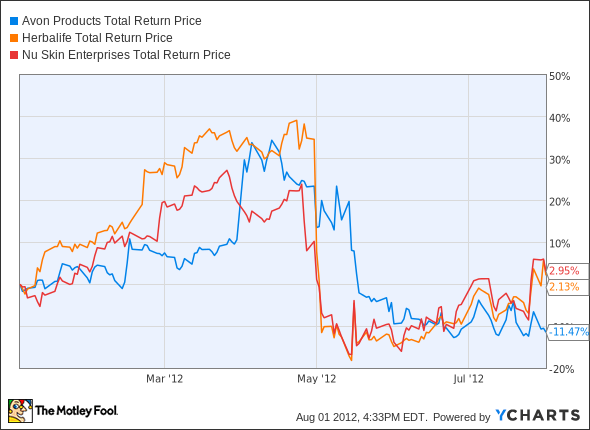 Avon's stock lost roughly 15% so far this year. Nu Skin's stock has gained nearly 1.5%, and Herbalife has increased 1.1% during this same time. However, none of these companies appear attractive compared to the overall S&P Retail Index; it's up 11% year to date.

Foolish bottom line
Some question the relevancy of Avon's direct-selling business model in an age of pervasive computers and increasing adoption of global e-commerce. Couple that with a company whose products offer little distinction, and you have a potential recipe for disaster. That being said, McCoy stated in a call with investors, "Our immediate focus is on stabilizing the business, reducing volatility in the short term, and then delivering and posting consistent sustainable performance."

Many wonder if it'll ever happen for this floundering business.

Avon's turnaround -- assuming there is one -- could take years. Instead of waiting this one out, consider a burgeoning company that's brimming with opportunity. Check out the one stock our analysts are so excited about they've dubbed it "The Motley Fool's Top Stock for 2012." This report won't be available forever, so get your free copy today.