This junior miner's resurgence is a medal-worthy performance.

The Olympic tradition permits champions to claim their place in history by showing the world that they are simply the best at what they do. The gold mining world seems to have found its reigning champion, and Primero Mining will bring home the gold.

My top stock pick for gold in 2012 came through in the clutch with a terrific second quarter that earned net profit of $15 million ($0.17 per share) and record operating cash flow of $35.8 million ($0.41 per share). Following a difficult (but necessary) journey to reassess the resource base and mine plan at its San Dimas mine, Primero has emerged in the best condition of its young life, with $125.7 million in cash on hand and a rock-solid foundation for organic production growth. In fact, Primero's regrouping process has proceeded so well that the company increased its guidance for 2012 production by 10% to between 110,000 and 120,000 ounces.

The market has taken notice in a big way and driven Primero's shares sharply higher in recent weeks to crush the gold-mining competition and earn its spot on the golden podium. Last Sept. 26, I offered a two-part explanation for why I considered Primero Mining "The Greatest Gold Stock in the World," and I encourage Fools to review that series to get the full backstory behind Primero's medal-winning performance. The following chart highlights Primero's stunning outperformance of the gold-mining competition in the period since those articles appeared. 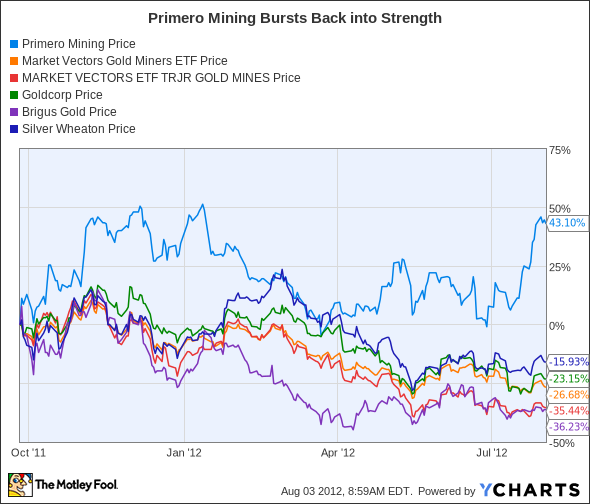 Primero's 43% advance represents a dramatic anomaly within an industry that has suffered through a deep and painful correction. Primero outperformed the Market Vectors Gold Miners ETF , which is dominated by producers of far larger scale, by a very convincing 70%! Against its more relevant peers held within the Market Vectors Junior Gold Miners ETF , the disparity widens to 79%. Even Goldcorp , my top pick among the majors, and (beginning Aug. 6) 41% stakeholder in Primero's shares, has underperformed Primero by 66% over the period.

Following this outstanding resurgence, I could see the shares running into a minor bout of near-term resistance before ultimately marching significantly higher still. Not only do I spot a touch of technical resistance on the chart, but the market may also remain in wait-and-see mode for a number of key forthcoming developments. Another key resource update is expected later this month, and then later in the third quarter Primero will render its decision on whether to expand the San Dimas mill to increase production capacity to 200,000 gold-equivalent ounces by about mid-2014. If the imminent resource update appears clearly supportive of a positive expansion decision, of course, the stock may break through resistance to enjoy additional upward momentum.

The biggest development to watch for, meanwhile, is the pending determination by Mexican tax authorities regarding whether the portion of Primero's silver production sold to Silver Wheaton under its silver stream agreement is taxed according to the spot price of silver or Primero's far-lower realized price. That determination, expected before the end of 2012, will unavoidably prove a very major catalyst in one direction or the other.

By making Primero Mining a core stock holding, I have placed my own wager upon a positive outcome. Likewise, I have selected the stock as a "top pick" within my Motley Fool CAPS portfolio. I look forward to witnessing the heights this stock can reach once that particular lead weight has been lifted from its shoulders. For ongoing coverage of this and other compelling picks among the miners of gold and silver, please bookmark my article list or follow me on Twitter.

Fool contributor Christopher Barker can be found blogging actively and acting Foolishly within the CAPS community under the username TMFSinchiruna. He tweets. He owns shares of Goldcorp, Primero Mining, and Silver Wheaton. The Motley Fool owns shares of Primero Mining. We Fools don't all hold the same opinions, but we all believe that considering a diverse range of insights makes us better investors. The Motley Fool has a disclosure policy.

Why Precious Metals Are Shining Again