AMC Networks is the Don Draper of the stock market. Like the main character of AMC's hit series Mad Men, the company looks great at first glance. But its slick surface conceals a dysfunctional, self-serving mess.

AMC has recently distinguished itself with critically acclaimed dramas Mad Men and Breaking Bad, and it scored cable TV's biggest ratings hit ever with zombie thriller The Walking Dead. Their popularity -- and the higher ad rates, carrier fees, and digital licensing revenue they brought in -- helped the company post impressive gains in Q1 2012.

AMC's first-quarter revenue rose 19.5% year over year to $326.2 million. Operating income jumped 37.2% to $97 million. Net income surged 44.8% to $43.1 million. And margins for both of those lines of the income statement widened significantly.

Unfortunately, none of that matters, for two crucial reasons.

The Dolan family: Making a killing
AMC has a dual-class stock structure. Its Class B shares carry 10 times the voting power of Class A shares and sole discretion to elect 75% of AMC's board, "rounded up to the nearest whole director." And 100% of the Class B stock rests with the Dolan family.

The stock ownership table in AMC's proxy statement reads more like genealogy than finance. Starting with 85-year-old patriarch Charles F. Dolan, founder of Cablevision and HBO, its Class B ownership listings are Dolans all the way down.

Seven of the 12 AMC board members are Dolans by birth or marriage, which makes the company's stated goal of a board featuring "diversity of viewpoints, opinions, background and experience" sound a mite contrived. All those Dolans already hold positions and/or directorships at Cablevision or its subsidiaries.

With their voting power consolidated, the Dolans could easily elect others to serve their interests on the board, but they'd forgo an extra payday in the process. As "non-employee directors," six of the seven Dolans on the board receive $50,000 per year, plus $2,000 per meeting for showing up in person, or $500 for literally phoning it in. In AMC's truncated fiscal 2011, those six Dolans each received between $25,000 and $29,000. Every director also gets $110,000 in AMC shares annually.

AMC acknowledges that Charles Dolan's duties elsewhere will leave him little time to devote to his chairman position. Yet it still pays him a $400,000 yearly salary, with a potential 175% bonus. Not bad for a part-time job.

Should you have any lingering illusions about the company's concern for shareholders not named Dolan, consider this: Since 2011, board member Thomas C. Dolan has been suing Cablevision -- and, in essence, his own family -- for $11 million in compensation he believes he's owed from 2005. That must make for interesting small talk at board meetings.

The walking debt
Even as the Dolans collect a few more bucks, AMC's been pinching pennies with a vengeance. In the months following its spinoff, its flagship network's demands for swift, deep budget cuts kept Mad Men off the air for 18 months, nearly sent Breaking Bad to another network, and led to popular Walking Dead showrunner Frank Darabont's abrupt firing.

Why did AMC threaten to throttle its gaggle of golden geese? Because Cablevision saddled its new spinoff with a nasty parting gift: a huge pile of debt.

Through clever fiscal maneuvering, Cablevision transferred $1.275 billion of its own debt to AMC, tax-free. As of Q1 2012, AMC now staggers under $2.24 billion in total debt, even after paying down $50 million of its obligations. The company spent $29.7 million in interest expense in Q1 alone.

AMC's debt-to-equity ratio doesn't exist, because it has no shareholder's equity. Thanks to its debt, AMC's liabilities in Q1 2012 exceeded its assets by more than $1 billion.

In its most recent 10-K filing, AMC flat-out tells investors that "we do not expect to generate sufficient cash from operations" to repay that debt by the time it comes due. And since its current covenants restrict its ability to obtain additional debt or sell assets, it'll likely issue new shares to pay what it owes -- and dilute existing shareholders.

Compared to Cablevision, AMC's debt looks manageable, but next to other pure-play cable network stocks, it seems grotesque.

Both Discovery Communications and Scripps Networks carry much smaller relative debt burdens, sport equal or lower P/Es, and have handily outpaced AMC's share growth over the past year: 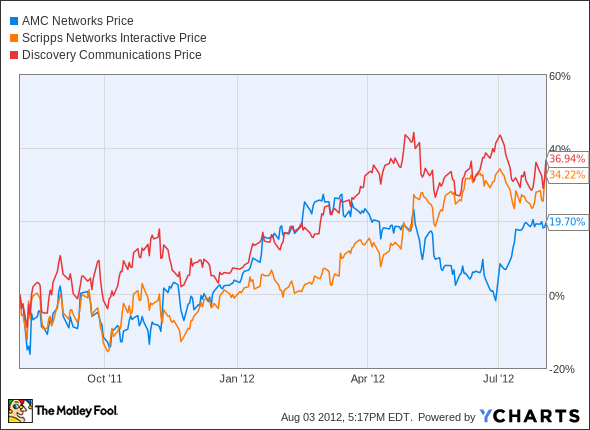 That lower debt, and the lack of restrictive covenants accompanying it, give Discovery and Scripps more freedom than AMC to pursue new ventures, make acquisitions, and take other aggressive steps to expand their businesses.

A stock both broken and bad
AMC's huge debt crippled it from the get-go, and the Dolan family's iron grip leaves other shareholders shut out. To this Fool, the company's spinoff seems like a hasty attempt to unload debt on the temporary strength of a handful of popular TV shows. I'm backing up my pessimism with a thumbs-down call on AMC in Motley Fool CAPS.

Don't be (small "F") fooled by AMC Networks' good looks or sweet talk. In the end, it's just an empty suit.

AMC may be a bad bet for reliable growth from a familiar name. But our Fool analysts have found three everyday stocks that could offer you a much better chance to expand your earnings with companies you already know. Discover all of these middle-class millionaire makers when you click on over to our special free report.