Shares of Mellanox Technologies hit a 52-week high on Friday. Let's take a look at how it got there and see if clear skies are still in the forecast.

Mellanox, which provides various semiconductor interconnect products that allow data transmission between servers and storage centers, has been taking advantage of these heavy investments in the cloud and for months has been blowing Wall Street's estimates out of the water. In the second quarter, Mellanox reported a 111% jump in year-over-year revenue to $133.5 million as earnings surpassed expectations by $0.25! The company's InfiniBand line of interconnect products contributed to 90% of Mellanox's total revenue. The upcoming release of Windows 8 in the fourth quarter is also expected to drive sales higher.

But for every positive, there's a potential pitfall. For Mellanox, that pitfall relates to its heavy reliance on IBM and Hewlett-Packard , which accounted for roughly 10% of revenue in the second quarter. I'm not so much worried about IBM, but Hewlett-Packard is in the midst of a major reorganization that has the company jettisoning 27,000 employees in order to cut costs. I wouldn't count on HP to dramatically increase its ordering any time soon and would much prefer to see Mellanox diversify its revenue stream beyond what it is now.

How it stacks up
Let's see how Mellanox stacks up next to its peers. 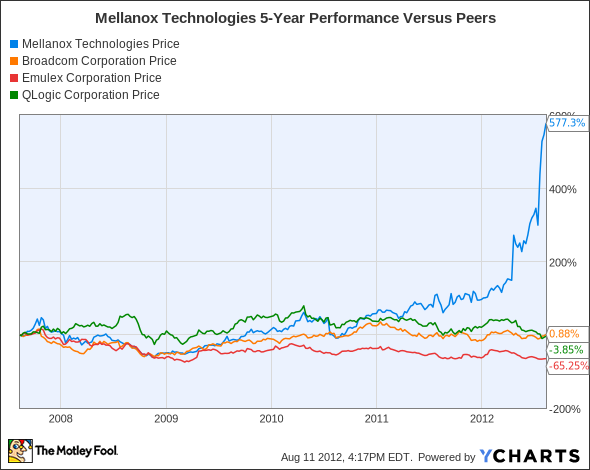 As you can see, Mellanox isn't even in the same ballpark in terms of performance with its peers, Broadcom , Emulex, and QLogic .

Pop quiz... which one is unlike the rest?

After a near 600% run over the past five years, Mellanox's valuation is entering nosebleed territory. However, with the company recently raising its guidance far beyond the Street's expectations and buyout rumors swirling around the company, its lofty valuation has easily been supported.

The same can't be said for some of its rivals who continue to stumble. QLogic reported a 9% contraction in revenue in the first quarter as profits slumped 42% from the previous year. QLogic continues to blame weak spending for its tepid forecast. The same can be said for Emulex, which hasn't had consistent earnings momentum for years.

Broadcom is sort of a mixed bag. The company is benefiting greatly from its relationship with Apple and is highly expected to increase maintain or increase its connectivity license wins in the upcoming iPhone 5, but its networking growth has been anything but spectacular. Broadcom's purchase of NetLogic Microsystems may remedy that, but investors aren't giving the company's network equipment segment much credit at the moment.

What's next
Now for the $64,000 question: What's next for Mellanox Technologies? That question depends on whether the big money continues to flow into data transmission and storage, if the company can outlast what is a very pricey valuation relative to its peers, and if it can further diversify its customer base.

Our very own CAPS community gives the company a three-star rating (out of five), with 91.8% of members expecting it to outperform. You can, however, count me among the pessimists as my fresh CAPScall of underperform is currently down about three points.

It's pretty hard to argue against the current growth trends at Mellanox, but it's pretty easy for me to see that over the long term the law of large numbers will reduce its growth rate. There are significantly better values on paper within the sector and, at some point, big telecoms are going to need to switch their spending back to basic infrastructure which will steal investment dollars from the cloud space. Between fierce competition and its lofty valuation, I'm decidedly bearish on Mellanox here.

With investment dollars streaming into the cloud hand over fist, it pays to keep up to date on the companies fueling this technological revolution. That was the motivation behind our analysts' latest premium research reports on Apple and Intel, which discuss the opportunities and pitfalls each company faces and how that could affect the stock. For the cost of less than a week's worth of coffee for each report, you too can get the same investing edge that Wall Street analysts have, plus get updates for one full year. Click here to get your copy of our latest report on Apple, and click here for Intel.